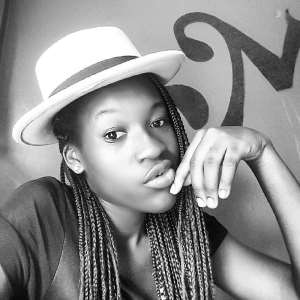 Ghana's most recognized and celebrated female blogger on her platform yesterday called multiple award winning stupendous rapper Michael Owusu Addo who is known in the showbiz circles as Sarkodie a music God. The young intelligent female blogger has so far being very influential in our industry with her support for reggae and dancehall.

Talking of blogging and promotion, she has been able to make it to the intentional music market with some works like hosting the Social Media Riddim which has over 8 Millions plays and 2Million downloads within 2 months after release. Her publications has also been endorsed by the Washington DC based renowned Voice Of America Radio including top Jamaican artistes namely Jah Vinci and Jemineye.

Juliana Ntiamoah who is known in the industry as Jullie Jay-Kanz wrote on her Facebook platform previously that most Nigerian stars do not take delight in joint works with Gh artistes but Ghanaians always run to them for music collaborations.

In her points ,she made mention of Wizkid, Davido, MI, Ice Prince,Dbanj, Banky W, Korede Bello, Tiwa Savage and even Patoranking who has a nice relation with Ghanaians because he used to stay here. She said this was the reason why Yemi Alade claimed she deserved BET Award over Stonebwoy.

According to the female blogger, she was seeking for answers to which Ghanaian Artiste is much respected and widely known in Nigeria. From the comments made by some of the Nigerians, they revealed that Sarkodie was the most talked about artiste since all the top Naija artistes mentioned above had featured Sarkodie including 2 Face which is very impressive.

Jullie made known that, it is not that easy to be known in the Nigerian show business and for sarkodie to be featured by all these 'dons' shows how powerful the award winning rapper is in Nigeria. In her own words ,she said:

" I jux wanted answers to which Ghanaian artiste is widely known and much respected in Nigeria.

And the Nigerians commenting are indirectly providing me with the results.

I believe Sark is the only Ghanaian artiste with the highest tally of collabs with these Naija mainstream artistes and he hardly goes to them for collab too....

Hehehe!! once in a blue moon.
Charlie if all these listed above naija DON's feature u you be Ghanaian music God ooo..because its not easy to penetrate into the Nigerian show business.....

On this note I will urge all GH artistes not to try disrespecting Sarkodie. 😁😁😁😁