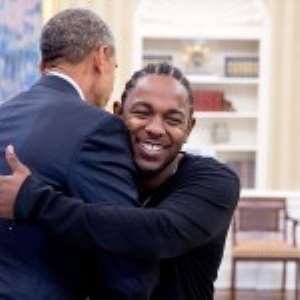 The TDE rapper was reportedly nervous during the meeting.

Kendrick Lamar met with President Obama in October while the rapper was in town to perform at the Kennedy Center , according to Valerie  Jarrett ,  Senior Advisor to the President of the United States and Assistant to the President for Public Engagement and Intergovernmental Affairs in the Obama administration.

“He came and he visited the president, and you know what the president said to him?” Jarrett says during an interview with BuzzFeed's Another Round podcast .

“[Because] he was a little nervous,” Jarrett continues, “bless his heart, he's really a very nice young man, and the president said, ‘Can you believe that we're both sitting in this Oval Office?’”

In December, President Obama said that Kendrick Lamar's “How Much A Dollar Cost”  was his favorite song of 2015.

The cut is featured on the Compton, California rapper's To Pimp A Butterfly  album , which helped Lamar land 11 Grammy nominations.

Free SHS Graduates Gather To Campaign For NPP
39 minutes ago