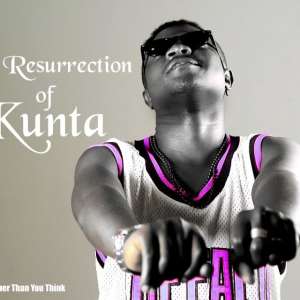 Kunta Kinte, the other half of Bradez has bounced back with a new single titled “Resurrection of Kunta”.a song that features EMMERE (ASHES & DUST) to be released this weekend.

According to Kunta, the single is to announce his comeback into the industry. In addition the single would tell his fans the real story of what he went through in the past years.

Kunta unveil “My come back into the music industry wouldn't be that difficult as people may be thinking. What I went through was very serious and it isn't one of the common diseases that one can finds remedies to. God has been good to me and I will tell my fans the real story in my upcoming single. My new song to announce my come back is titled ‘Resurrection of Kunta’ and will be out this month January 10th 2016”.

Kunta in explaining why he has decided to title his new single as “Resurrection of Kunta”, he revealed that it is because he did died and has resurrected again.

“Yes, I died and resurrected. I went into coma for three days and during that time they were at my gate ready to take me to the mortuary but God being so good, it didn't happen and I rose from dead”, he stressed.

“A lot of things happened when I was down on my sick bed but I think since I’m fully fit and can do what I used to do before which includes going to the studio to record, writing songs and many other things, there is the need to share my experience in the first song to release”, he explained further.

Kunta also condemned rumors of is bed ridden state being attributed to his liking for many girlfriends then at that time. He hinted that back then in Legon, he had only one girlfriend by named Vani; who would not allow him chase other ladies in Legon.

“A lesson learnt is that as showbiz persons, there is no need to be arrogant. I now fear human beings because most people said a lot about me which was not true”, he added.

Kunta Kinte however expressed optimism that it would not be difficult to make a comeback despite that fact that the music industry has changed.

Kunta Kinte, together with his brother formed the Bradez group and made hits like ‘One Gallon’ and Simple. He fizzled out six years ago when he suffered mild stroke which took him away from the music scene.