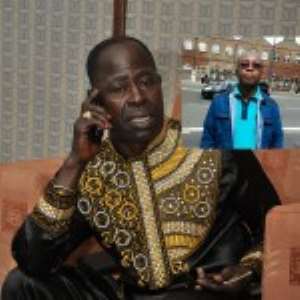 Evergreen highlife musician Abrantie Amakye Dede has finally spoken to the media for the very first time after he and two of his band members got involved in a motor accident that killed his manager, Isaac Yeboah.

He continued: “It's true that New Year didn't begin well for me but God said in all things we should give thanks and praises to Him. First of all, I want to thank all Ghanaians that after the accident involving myself, my bodyguard and my manager, through which my manager lost his life, I am still at the Korle-Bu Hospital but I have heard all their prayers and I am very grateful. May God bless all of you.”

After the accident, Amakye Dede was not told immediately that his manager, Isaac, did not survive. The news was broken to him days later when he had partly recovered from the injuries sustained from the crash.

Amakye Dede, according to eyewitness reports, nearly collapsed and his blood pressure shot up when the sad news of Isaac's death was finally communicated to him.

The deceased, Isaac Yeboah, is survived by two children and a wife. He was Editor of the P&P newspaper and a regular panel member of Peace Fm's Entertainment Review show.

The accident happened a few minutes after 1am on Saturday, January 2 at the Paradise Resort at Nsutam on the Accra-Kumasi road where Amakye and his band had gone to perform at the 'Paradise Xmas Festa With The Stars'.

Isaac and Prince Mensah were reportedly standing by their car which was parked by the roadside, while Amakye was changing his clothes, when a Sprinter 207 from Kumasi heading towards Accra suddenly rammed into their car due to brake failure, killing Isaac on the spot.

Amakye and his bodyguard, Prince Mensah, were severely injured and are currently on admission at the Korle-Bu Teaching Hospital and the 37 Military Hospital in Accra respectively.