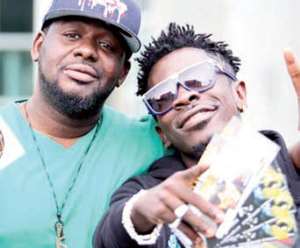 Award-winning dancehall musician Shatta Wale has said his former manager, Lawrence Hanson aka Bulldog, had threatened to kill him on more than one occasion and that he has a witness who heard the death threats.

'I have repeated the part about him [Bulldog] threatening to kill me twice and I won’t hide it. Somebody asked him, 'Bulldog are you not the same person who has issues to answer in Ghana about things like these? And he responded, 'don’t mind him, I will kill him like I killed the other guy,'' Shatta Wale revealed on Pluzz 89.9 Fm Monday morning while addressing a live-on-air press conference to explain why he had parted ways with his manager.

Shatta Wale's allegation that Bulldog had threatened to kill him like he 'killed the other guy' is alarming because the Ghana Police Service recently told the public they had information that Bulldog was responsible for the death of Fennec Okyere, the manager of Kwaw Kesse.

That docket has not been closed and investigations are still in full swing.

It is not yet certain whether the Police Service would take a cue from the public revelation to find out the identity of the unnamed 'other guy' supposed to have been murdered by Bulldog.

Shatta Wale did not provide any evidence whatsoever to back his allegation against Bulldog and all attempts to reach the latter for his response proved unsuccessful.

The press conference was provoked by a press statement issued by Bullhaus Entertainment, the company Bulldog works for, that it was no longer managing Shatta Wale.

The dancehall musician however disclosed that the press statement from Bullhaus was a knee-jerk panic reaction after they realised he was about to part ways with them.

'They knew I was about to tell them I don't want them to manage me anymore and that I have sacked Bulldog and Bullhaus for that matter so they put out that statement.

'Bullhaus Entertainment has never done anything to Shatta Wale's career apart from following me like a bodyguard. They have never had any endorsement for me. The Guinness endorsement came and it was my dad who ran that deal… From day one, I have worked this thing out myself and when you talk about deals coming or anything coming my way, it is people recognising my hard work and coming to me directly.

'Anything I do is with my money. Bulldog has never taken one penny out of his pocket to sort my things out. Sometimes people in this industry want to act like big men. I pay Bulldog, I pay Bullhaus; they don't pay me. I want the world to know I am a clean person and I am working,' Shatta Wale stated.

The popular musician revealed that he did not have a working contract with Bulldog and that he decided what amount of money he wanted to give the manager.

The popular musician said he is not a bad person or a person with a bad attitude and that he expected his manager to have worked on his public image and the perception the public holds of him.

The news of Bulldog parting ways with Shatta Wale broke Saturday dawn and was largely dismissed as a publicity stunt.

Opinions however started changing after Shatta Wale's press conference Monday morning and the damning revelations he made.

Election 2020: Only Uniform Personnel Will Be Deployed – Gha...
2 hours ago