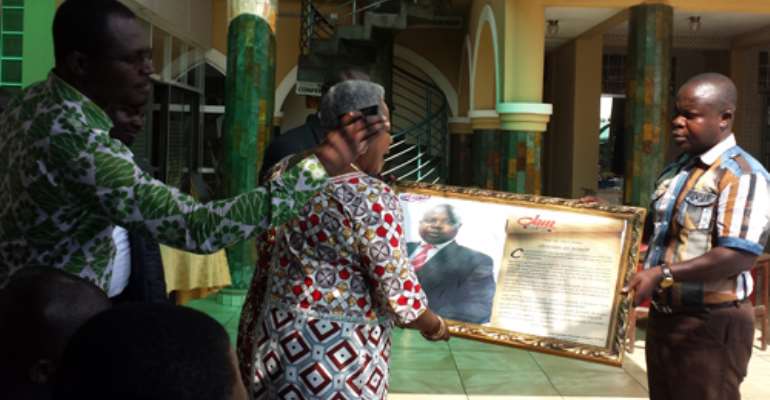 Atinka FM has honoured two of its senior anchors who won two of the coveted awards at the 2015 edition of the Radio and Television Personality (RTP) award.

Citations were presented to the two gentlemen in recognition of their hard works and achievements which have helped to raise the bar of Atinka FM.

Board Chairman of Jam Media Group Limited, Prof Boasiako Omane-Antwi, in an address, stated that award of the two personalities just within their eight-months of work at Atinka FM reinforces that the station is a force to reckon with within the Ghanaian media and beyond.

According to him, 'It also confirms that listenership within the confines of Atink FM has wholly accepted us and bought into our vision.'

He claimed that 'through our programmes, we have indeed become the voice of the voiceless. It is this impact we have made in the lives of our listeners that have made them to cause an impact in our lives by voting for these two staff of Atinka FM to win the award.'

Editor of the DAILY GUIDE, Fortune Alimi, in a brief remark, commended the two winners.

Mr Alimi expressed the hope that Atinka FM is on the road to the top for winning two of the three most important awards in the industry, but urged the station to keep up with the good works.

Meanwhile, President of the Ghana Journalist Association (GJA), Affail Monney, in a keynote address, has urged media houses in Ghana to endeavour to celebrate their reporters who excel in their careers.