It’s Not Easy To Abstain From Sex - Ghanaian Actress. 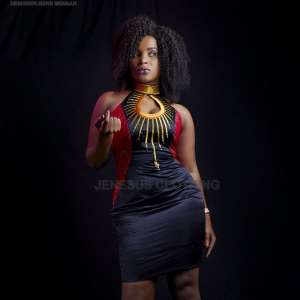 The kumasi based actress told GhLinks in an interview that “it’s not easy to abstain from Sex especially when you are in a relationship but Biblically the Right way is No Sex before Marriage and since Im religious person I will suggest no sex before marriage “.

GhLinks : What are you currently working on?

Benedicta Gafah : About to release a movie I produced and also working on my GAFAH NEEDY FOUNDATION which is aimed at Helping the Needy and the Aged . I’m also working on a short minute Youtube inspirational Talk “Time with Benedicta​”

GhLinks : Which has been your biggest movie so far?

GhLinks : What has been your biggest challenge so far?

Benedicta Gafah : People Mistake the “Wild” Character I play in Movies to be to be my real Character and deep down it really hurts.

GhLinks : How do you get into character when you see scripts?

Benedicta Gafah : I do a lot of research about the role I’m playing and put myself into character.

GhLinks:Who is your biggest inspiration in acting?

Benedicta Gafah: Angelina Jolie. I love her Courage and Charisma.

GhLinks: Can you act nude for One million dollars?

GhLinks:What has been your most embarrassing moment so far?

Benedicta Gafah : The wrong Publication that said I slept with a married man and that which also said I’m much more prettier than McBrown. I admire Mcbrown and I believe everybody is beautiful.

GhLinks:What’s your view on sex before marriage?

Benedicta Gafah: It’s not easy to abstain from Sex especially when you are in a relationshipbut Biblically the Right way is No Sex before Marriage and since Im religious person I will suggest no sex before marriage.