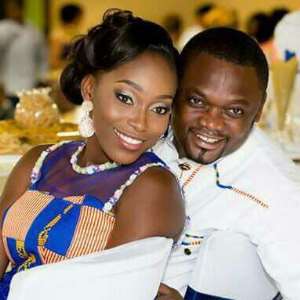 Impactful Ghanaian worship male duo, Willie and Mike went on their 20th anniversary tour of the USA to launch a video from their new album, but one half of the group had other ideas, as he ended up in a traditional wedding with the love of his life.

Williams Papa Yaw Owusu Asamoah, affectionately called Willie got customarily hooked to his fiancee Linda Ennin at a grand traditional wedding in Columbus, Ohio, ahead of the church wedding slated for December 12, 2015 at Tesano Baptist Church in Accra.

Willie and Mike had earlier announced they were going to do a double wedding on their same day, but with this traditional wedding and forthcoming church wedding, Willie has gone ahead of Michael Adomako II, who is planning his wedding for next year.

Willie got customarily married to his fiancée of four years, Linda, who is a USA-based gospel musician and Nurse, currently doing her Masters in Nursing at the Chamberlain College of Nursing in Atlanta, Georgia.

The two met in the USA some four years ago through a cousin of Linda's, but the main hook for them was the discovery of something they have in common; singing for The Lord.

"I later met Linda singing at JP Assemblies of God Church in Columbus, Ohio and that was the real hook for me because I loved the fact that she is also a worshiper like me," Willie said in an exclusive interview.

And true to what he said, Linda actually has one album titled "Worship Medley" to her credit, and she has some of her works on YouTube as well.

Willie said Linda has been very supportive of his ministry and of Willie and Mike over the years and he is confident she would even add more value to their ministry in the years to come.

Meanwhile, Mike is also preparing on the sidelines to get fully hooked to his fiancée Dorcas Asamoah next year. Dorcas is also a Nurse and a singer like Linda.

But prior to the December grand church wedding, Willie and Mike will be releasing the first video off their new "Presence" album on selected TV stations in the country.

The hymns video, dubbed Trust and Obey, was first premiered at the Presbyterian Church in Virginia and is poised to start airing on Adom TV and other stations this week.

It was produced by Mexx Studios in Maryland, and it is the first ever Willie and Mike video made in the USA.