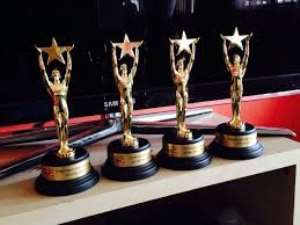 It is that time of the year again when radio and television personalities across the country who have been nominated for recognition jostle among themselves to gain the attention of the voting public to enable them win various awards.

Despite the controversies this RTP Awards have been bedevilled with in time past due to the operational inefficiencies on the part of the organisers, Big Events Ghana , the award scheme has become a major platform for appreciating the works of radio and television personalities, especially those based outside Accra.

This year, some names have been put forward by the organizers as nominees for the enviable title of radio personality for the Volta Region. ..................and the nominees are; Michael Nene Lamptey, Sizzla Dellings Nyasorgbor, Bright Ellis of Kekeli FM, Juliet Nugble of Volta Premier FM and Israel Abotsivia of Kekeli FM

Once again, the drive time and morning show hosts have dominated the list of nominees. Michael, Sizzla and Ellis are all drive time hosts on their various networks whilst Juliet and Israel belong to the morning show group. This, in my opinion, reflects the competitive nature of these two segments of the radio market in Ghana.

I am not surprised by the names on the list, especially the three drive time hosts nominated because it has been my personal conviction that these three gentlemen are the best in that segment of the radio market in the Volta Region. The other nominees have, over the years, also curved a niche for themselves in the morning show segment.

The only reservation l have with this RTP Award scheme and all other schemes which leave the selection of the best among the nominees in the hands of the general public, through texts messages, is the inability of the organisers to ensure each member of the public is entitled to just one vote. That is a major flaw because this system of voting reduces the award scheme to petty politics as the various nominees resort to all kinds of machinations to get the popular votes.

This certainly cannot be a fair playing field in the case of FM radio where the stations the various nominees work at have different coverage areas in terms of mileage. That naturally places the nominee at the station with the widest coverage in a pole position to garner more votes from the public. The system also creates an environment for people to engage in multiple voting (which is promoted by most of the nominees themselves). What about a collegiate system which places at least 50% of the votes in the hands of fellow presenters and other stakeholders in the industry.

Back to the nominees for the year, all the nominees have been impressive in the year under review and therefore qualify to be named the radio personality of the year for the Volta Region. But as the saying goes ‘only one person can wear the crown at a time’, so here is my take on the chances of the various nominees.

Juliet Nugble and her colleague at Volta Premier FM have been associated with the RTP for some time now. Being the only female voice on morning radio in Ho she has been on Volta Premier FM which has a large tech savvy student population. This gives her an audience who are in a better position to understand what this RTP Award is all about and how to go about the voting. That could work to her advantage if she plays her cards very well (as in harnessing the votes of the large Polytechnic community to her advantage).

Nene Lamptey has previously won this award for the Volta Region. As the host of the most cosmopolitan drive time radio show in the region, the man who has DJ Tablet as his claim to fame, will once again be counting on the support of his youthful listeners to propel him to the top spot.

The only challenge that l foresee for Volta Premier FM is that two of the station’s presenters have been nominated for the same award. That will certainly split the votes from their listeners thereby creating a leeway for other nominees to sail through.

Sizzla One’s entry into the radio market in Ho has undoubtedly added some glitz to the landscape, especially the drive time segment, where he has been one of the top performers. (by my standards ooooo). It therefore came as no surprise to me when his name appeared on the nomination list for the 2014 edition of the RTP Awards. For my money, he is one of the favourites for this year’s award judging by the amount of effort he has put into his work in the year under review. He is sure to get a good number of votes from the Civic Centre and Fiave areas of Ho.

Also from the staples of Kekeli FM is Israel Abotsivia, the host of the station’s morning show, who is making an appearance on the RTP platform. In spite of the popularity of his show he may not make it to the top due to the calibre of people who mostly patronize his show. He serves a section of society (the mass market of radio) who may find it difficult to appreciate what this RTP business is all about or even be reluctant to part way with the premium charges the text messages cost. His station also stands the risk of suffering from the vote splitting phenomenon because Sizzla One is also contending for the same award.

Entering the RTP circles this year on the ticket of Kuul FM is another ‘old timer’ in the business of drive time radio shows, Bright Ellis, the current host of Ultimate Drive on Kuul FM in Ho. In the drive time segment of the radio market in Ho l have always rated him among the top three even during his days at US FM. To this end, his nomination for this coveted award in radio at the regional level has not been a surprise to yours truly. The dude has his own style which appeals to both the young and old. He has also been on the airwaves of Volta for some time now (from his days at Heritage FM in Hohoe, through US FM and now Kuul FM) and would have built an audience base that he can count on in times like this.

Two things will be working to his advantage. First, he works on a bigger platform in terms of mileage compared to the other contenders. That obviously gives him a much wider listenership and if listenership will translate into votes then he is on his way to grabbing the bragging right in Volta radio for 2015. Secondly, his station is facing competition from Volta Premier FM and Kekeli FM and these two stations have two nominees each. This can lead to the splitting of votes at Volta Premier and Kekeli FM giving him a leeway to slip through.

All said and done about the nominees, l believe the RTP Awards needs a serious restructuring because there are so many areas of the radio business which have been left out of the awards in the other regions beside the Greater Accra and Ashanti regions. Organising the awards at the regional levels is the way forward.

I hope Prince Mackey and his team at Big Events Ghana have put their house in order this time round to prevent the perennial challenges that face the RTP Awards.