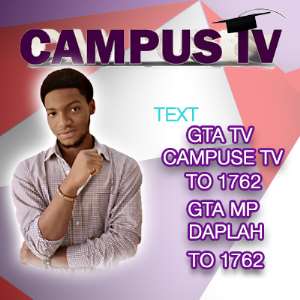 Stanley Daplah popularly known as A-Jay got a nod for his work as host of Jay&U, a segment on the Campus TV show on Amansan Television (ATV) with a nomination in the Most Influential Male TV Presenter category in the 2nd edition of the Ghana Tertiary Awards 2015.

In about twenty categories, Campus TV which airs every Sunday from 5:00pm to 6:00pm and A-Jay,the Jay&U segment host earned a slot each.

To vote for A-Jay, in the Most Influential Student Male TV Presenter, text GTA MP DAPLAH to short code 1762 on all networks.

The C. E. O of Youth Web Entertainment and organizers of the Ghana Tertiary Awards, Richard Sarpong in an interview said they have spoken to their sponsors who will give out souvenirs to the winners aside the plaque that would be given to them.

Also he disclosed that they are in talks with other organizations to help organize refresher courses for their winners.