Change Your DP With Pappy Kojo Slated For 23rd September 2015 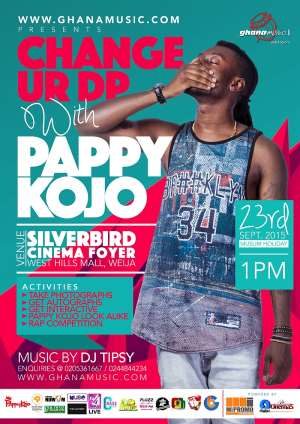 The much-awaited biggest shut down event in the month of September is finally here. Ghana Music.com presents the maiden edition of “Change Ur DP” with the ‘Realer No’ & ‘Ay3 Late’ hit maker Pappy Kojo.

The concept is basically to connect Pappy Kojo to his die-hard fans in a more beneficial and entertaining atmosphere. The impression is to hook up all folks who in one way or the other admire Pappy Kojo for his appearance, his looks and style of music.

The show opens up an array of exciting activities, where Pappy’s lucky fans will have the opportunity to perform with him in a rap contest, to unveil Pappy Kojo look alike, signing of autographs on branded T-shirts and instant large size pictures with his fans, and most importantly to unleash the hidden truth surrounding the success of Pappy Kojo in an interactive ambiance.

The show is on Wednesday the 23rd September, 2015, a republic holiday at the Foyer of Silverbird cinema inside West Hills mall, Weija.

The time is 1:00pm prompt.
Change Ur DP with Pappy Kojo is powered by MiPROMO Media and Silverbird cinema.