Landlord Strips Sarah Kwabla. They Promised Me $20,000 To Lie Against Asamoah Gyan 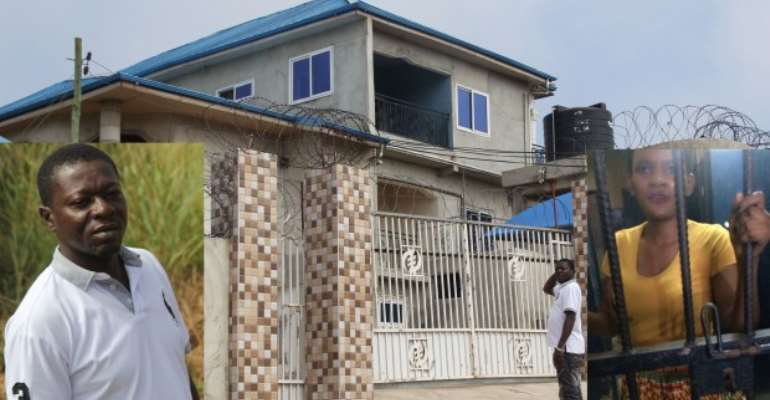 The house in which Sarah Kwabla and Gyan had sex affair. INSET: Mathhew Banahene and Sarah Kwabla

MATTHEW BANAHENE, landlord of Sarah Kwabla, the lady who is alleging that she was raped and impregnated  by Black Stars Captain Asamoah Gyan, has opened a can of worms by revealing that the lady and her mother  promised to pay him an amount of $20,000 if he could tell a lie to support her rape allegation against the footballer.

Mr Banahene told NEWS-ONE that his tenant, Sarah Kwabla, first contacted him with her mother to hatch the plot and when he refused to cooperate, she returned again with Ekow Micah to have a second meeting with him and assured that the police had already been sorted out and all they wanted was for him to go write a false statement that he heard her screaming and yelling and struggling with Asamoah Gyan.

As has become characteristic of Sarah Kwabla, she neither picked her phone calls nor replied to sms text messages NEWS-ONE sent to her to get her respond to the allegations of her landlord.

Below are excerpts of the exclusive interview Matthew Banahene granted NEWS-ONE.

How did this happen?
She came to me with her mother and another woman and they said I should follow them to the police station to go and tell a lie against Asamoah Gyan that I heard him raping Sarah and that she was shouting and there was a struggle in her room. They begged me to tell the police that when Asamoah Gyan came to the house, I heard Sarah shouting and begging him not to rape her. I was shocked and advised them to stop the nonsense but they insisted that if I could help them with the lie, they would get an amount of $100,000.00 from Asamoah Gyan and that they would give me 20 percent of the money, which is $20,000. I did not agree but she came back with Ekow Micah to beg me to help them nail Asamoah Gyan.

Why did you not agree?
The truth is that I did not even see Asamoah Gyan the day he came here and I did not hear her shout. I did not even know they had sexual intercourse on that day so what she and her mother were asking me to do was strange. But I am not surprised. There was a time she did the same thing to a certain man who came to sleep in her room. Next morning, she accused the man of rape and pregnancy and created a big fight.

I remember the man had to park his car in my house for three days before he could come for it and when we asked him, he said she was punishing him for consensual sex she had with him because she asked for some big money he did not have.

What did you tell the mother?
I warned them to stop the nonsense and that I am not a greedy, wicked thief but they did not agree. So I remember that on July 7 or so, Ekow Micah also called me and said we should meet at Kokrobitey.  We met at Big Milly's. Sarah joined us and it was on the same thing. Ekow said I should help them with a statement to the police that I heard Sarah shouting rape, rape and that later I saw Asamoah Gyan coming out of the room. I told him it can't work and that I can't defend the lie if the case goes to court but Ekow insisted that he had already done all police arrangements and that there was nothing to fear.

Did Ekow also promise you anything?
He said the same thing. Ekow said they would get $100,000 from Asamoah Gyan and that they would give me $20,000. I believed him because I have known him as her lover and everyone in our community knows about their relationship. They are very popular. She is very troublesome and has this tattoo of a vulture and a snake on her legs.

Why did you not report them to the police?
I have done that at the regional police headquarters. I have already given them my statement. I did not report them the same day, but I did later. They are very dangerous people and they seem to have a lot of police connections so even if you report them, you won't get far, I have had several police cases with Sarah Kwabla and Ekow Micah and the cases never get anywhere.

Look, even on the day Ekow got arrested, Sarah Kwabla told me that she would call the IGP personally and get him released immediately.  But I think because the media picked the story up and then there was a narcotic charge involved, it was difficult. They really have some connections at the top.

Tell us about some of the cases.
There was one time she brought police to my house that I had stolen her phones from her room. I got arrested and during investigations it became clear she only wanted to spoil my name because I was asking them to pay me my overdue rent advance.  Later, Ekow managed to prove to the police that Sarah's phone had not been stolen and that the same phone chip she was using before the complaint of phone theft was the same chip she was using. When the police examined the chip, they realised she had not gone for a SIM card replacement, although she claimed the chip was stolen with the phone. But she was never arrested for deceit of public officers and for spoiling my name. There are many instances where she walks away free no matter what she does. Even though her rent has expired, I can't sack her.

When did the rent expire?
Oh, they (Sarah and Ekow) rented this place for only a year and I gave it to them for GH¢400 a month. The contract was that I wanted two years advance so that I could use the money to pay the person who actually renovated the place but could not live there because her work transferred her outside Accra. After three months they started to fight with me, accusing me of theft; from one police case to another. The one year has expired and they have not given me a dime apart from the first payment they did.

You rented out your two-bedroom self-contained apartment with CCTV installation for GH¢400 per month?

There is no CCTV anywhere in my house. That report is false. Look, when Sarah and her mother came to me to help them lie against Asamoah Gyan, she said she used her laptop to record the sexual encounter and that she hid the laptop somewhere in the room. Later I heard her lawyer say she used CCTV.  Till date, no one has seen the video. No police man, no lawyer, no journalist, no one has seen it.

CHRONOLOGY SHEET
Lawyers for Asamoah Gyan first reported Sarah Kwabla to the Odorkor Police and claimed she was harassing the footballer and threatening to publicly release a recording of a sexual encounter she had with him at her apartment.

Sarah denied the charge and said the sexual intercourse was consensual and resulted in a pregnancy. It was agreed by both parties that Asamoah Gyan should take care of the pregnancy pending a paternity test to determine whether or not he was responsible.

Sarah Kwabla's lawyers received the first payment from the Gyans after a date for the paternity test had been agreed on.

Sarah Kwabla, on the day of the paternity test, did not turn up. Rather, she went to the Ministries Police Station (DOVVSU) to lodge a new complaint of rape and sodomy against the footballer, some five months after the sexual encounter.

The Gyan camp later reported to the Airport Police that a journalist was attempting to use the story and supposed video to extort money from them and had threatened to blackmail the footballer with the said video unless he paid some money.

The police, while investigating the complaint, caught the journalist collecting the agreed blackmail fee from the Gyan camp. Further investigations revealed there were several audio recordings between Sarah Kwabla, Ekow Micah and the journalist on how to use the story to milk the footballer.

Sarah Kwabla at this point claimed she had suffered a miscarriage. Ekow Micah also got into further trouble when police, while investigating the extortion case, found on him a substance suspected to be Indian hemp.

NEWS-ONE would continue with transcripts of Matthew Banahene's interview in our subsequent editions.