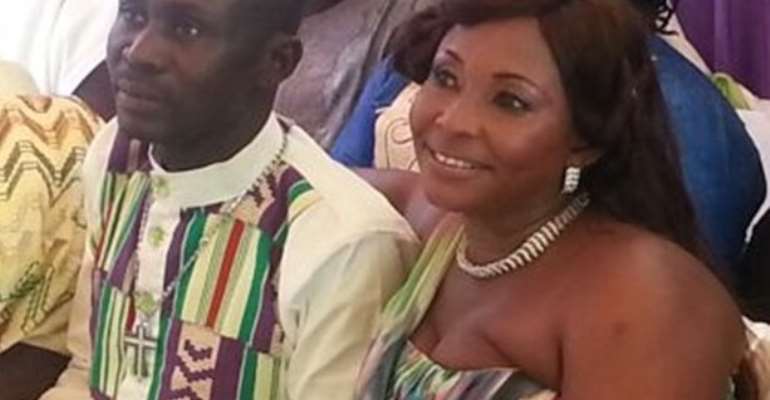 Hilarious Actress Rose Afrakomah Mensah popularly known in the showbiz industry as Akua Attaa Kyeiwaa has finally succeeded in her quest of filing for a divorce of her 4 days engagement that took place last weekend with Daniel Osei also known as American Man.

The action of kyeiwaa follows the reports that Mr Daniel has rendered an apology to his former wife Madam Florence Kyei after it had revealed that Mr Daniel Osei had already married to different woman with a child.

The divorced was made possible at a crouch meeting somewhere at Sokoban a suburb of Kumasi at undisclosed place last night.

According to our sources, upon receiving the news during the meeting Mr. Daniel Akwasi Osei knelt down in front of her divorced wife (Kyeiwaa) pleading in tears for her to rescind her decision but Kyeiwaa made sure her decision is firmed taken.

Speaking to Seancitygh.com Actress Vivian Jill Lawrence said they are much disappointing in the man over the mess he has caused after last Sunday's engagement.

Vivian Jill said they never knew that the man in question was a married man until yesterday they had a called that the man has rendered an unqualified apology to his acclaimed former wife.