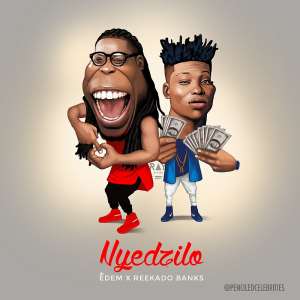 Due for release on September 1 2015, Edem believes the new single Nyedzilo will concretize his place on the continent. He also believes Nyedzilo will take over the musical charts and continue from where his single with Choc City artist M.I. Abaga, Delilah left off.

With an extraordinary chemistry between both artists on the Magnom (credited for Edem’s hit single Koene) produced single, one is tempted to believe both artists are signed unto the same record label or have worked on several projects before.

Unconventional of most cover arts, Edem employs PenciledCelebrities who craftily creates an amazing animation of the two artists.

Speaking on the upcoming single, Reekado Banks who feels positive about the song said, the new single will add up to his music catalogue being enjoyed by Ghanaians.