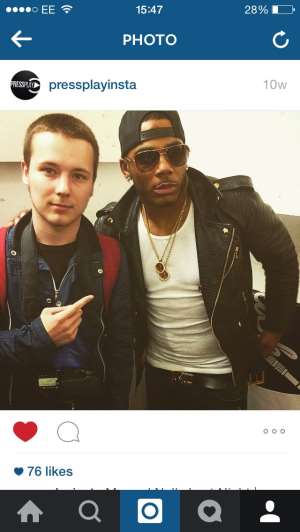 Ghanaian UK based Urban & Hip pop artist Mega 12 is back in the country and has talked on his readiness for his HomoFest show next month and projects with UK’s ace music video director Danny Streetz in an exclusive interview with Flex newspaper.

The two arrived last Sunday night and are preparing to shoot four music videos from Mega’s coming album. In a chat, director Danny expresses his excitements in working with Mega and in Ghana for the first time with ‘A’ artists who have been featured in some of Mega’s singles. He said Ghana is home and believe is going to have a wonderful working time with these GH artists.

Mega also known as Fresh Prince who was recently featured on Yaa Pono’s hit single ‘Amen’ speaking to ATV revealed he’s coming back home to complete his visuals for all his new singles. The rapper said he has worked on new songs with Jupitar, Stonebowy, Tinny, Yaa Pono, Promzy and some other A list artists in the country and need to release visuals of these projects for his fans and all music lovers.

The Mega records rapper who will be bringing artistes like Jupitar, Stonebwoy, Lazzy of VVIP, Yaa Pono, Tinny,Gasmilla and other A list artistes in the country on one stage to rock his HomoFest show will also be opening an Ultra Modern Recording Studio in the capital to give colleague musicians and upcoming acts a professional recording opportunity. Mega have signed a single talent under his record by name S3k3 and is still looking forward to sign on more talents from home.

Visual for the ‘Amen’ remix have gone viral and has over 20k views on youtube. Danny Streetz has filmed UK’s biggest Urban & Hip pop artists with over 22k views on his Youtube channel and also worked with US artists such as Ciara, YG, Jeremih, August Alsina and many other ‘A’ list acts.

The fresh UK prince from Ghana, Mega, will be organizing more events in the capital this year and have more visuals and singles coming up.