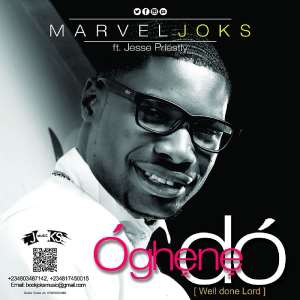 Music Evangelist Marvel Joks has released both the original version and the remixed version of of the very popular worship song “ Oghene Doh ”.

There has been dispute as regarding who really wrote and released the song first. The music minister who is based in Auchi, delta state with Omega Fire Ministry of Apostle Johnson Suleiman has come out to release the original vision which dates back to 2011 and the remixed version record in 2014.

In the Remixed version he featured Jesse Priestly who is from Zimbabwe and is a back up vocalist for Israel Houghton and the Music Director at Bishop Tudor Bismack’s church.

Remininsce to 2011 when he released his first album 'Marvellous God', Marvel Joks has become a household name in the Gospel Music Industry with several outstanding singles and videos he has released under his Music Label Joks Music.

The Isoko born Icon started music at a very young age and was part of the music group called (the name of the group), he later proceeded to working on his own project and was signed to Ezy Music.

His first album project was widely accepted and recognised around the world. This paved way for him to minister in many events and on various stages with renowned Gospel Ministers in and out of Nigeria. Marvel got his major breakthrough in 2014 when he toured 5 cities of South Africa preaching the gospel of Christ through worship. That tour introduced marvel into the hall of fame of the music industry.

He is a loving son of God's servants Apostle & Rev. (Mrs.) Johnson Suleman who has mentored, blessed, imparted and sponsored him to success. He is passionate about raising genuine worshippers for God who will come to Him not because of what they want, but because they Love Him.

Some of his other popular songs includes; Marvellous God, Omini-Brancher, Eshe Gan, You are not alone, and more.

Marvel leads The WorldChangers Music Team International where he grooms and mentors several other music ministers and instrumentalists. He also hosts the International Music Program 'Music and Fire'.