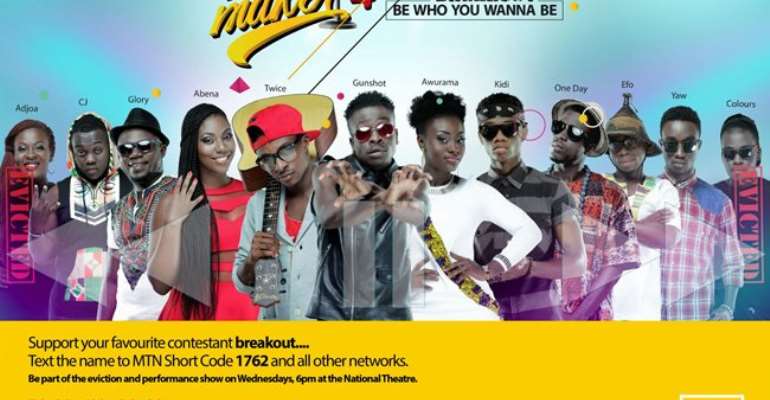 The second week of the Hitmaker live performances took an interesting turn. Many were expecting a gospel night but organizers had a few surprises up their sleeves.

The first surprise was the first eviction before the performances, yes! Even though all twelve contestants had rehearsed their gospel tunes, only ten of them were going to perform and continue in the running to wining the GHc100,000 prize package at stake.

Abena, Glory and Kidi were safe from eviction because they emerged as the top performers last week but that was not the same story for Oneday, Adjoa and Colours.

They were in the bottom three, One Day was lucky to escape eviction but Adjoa and Colours had to kiss their dreams of winning the biggest prize package in reality TV in Ghana good bye.

This brought an emotional atmosphere into the auditorium as the contestants themselves were saddened by the eviction of their friends, but as the saying goes “the show must go on” and the show did go on.

The second surprise was that, the performances on the gospel night were going to take a form of a battle, first in the battle game was Awurama and Twice.

They took on each other in a battle of smooth voices and even though the judges Eazzy, Okyeame Kwame, Akwesi Aboagye and guest judge Nii Okai of ‘Mokobe’ fame conceded that they were at par in terms of performances, there were not too impressed.

It was amazing to watch Yaw perform as though he was thanking God for keeping him from eviction, it showed in his confidence and whilst we would love to thank God for Yaw’s eviction, it is very clear that the fear of eviction had a lot to do with it.

Glory was a natural, he commanded the stage by taking on a complicated some and making it seem easy. Their battle was memorable because for the first time in battle history, both competitors hugged. After the friendly hostilities, Yaw emerged winner.

Then came the battle that got most people excited just by hearing the paring. Both contestants were awesome last week and were also breakout nominees.

Abena came into the battle with a lot of confidence because she was the winner of the breakout moment that meant she was the best performer last week and she had to live up to that title. Kidi on the other hand effortlessly showed his voice dexterity once again and gave a simply awesome performance.

The judges had a tough time deciding the winner of the battle between Abena and Kidi but Abena emerged winner of the very closely fought battle.

The atmosphere became exceptionally charged when the next battle game pairing was mentioned. Gunshot and One Day went head to head on stage. Both contestants are energetic performers, they both have a way of carrying the audience along but on gospel night, One Day’s clear voice won him the battle.

Then came the time to crown a night of awesome performances, two unique rappers went head to head on stage. Efo and CJ went into a Twi rap battle, the audience and judges were swayed by each of the performances and were left with memorable punch lines. It was a difficult choice but in the end, CJ’s stage performance and skills won him the rap battle.

Only ten contestants remain, but sadly on Wednesday they will be reduced to eight. Eviction will precede the live performances and there is only one way of ensuring that your favorite is amongst the eight who will be performing on Wednesday.

You have 60% of the vote weighting and the judges have 40%, keep your favorite in by texting his or her name to MTN short code 1762 and on other networks.

The battle for the biggest prize in GH reality TV continues this and every Wednesday at the National Theatre at 5.30 pm.

This week the battle takes a different turn as the Hitmakers perform their own songs. So on Wednesday all roads will lead to the National Theater and remember, admission is free!!!

MTN Hitmaker 4 is sponsored by MTN and produced by Charterhouse.