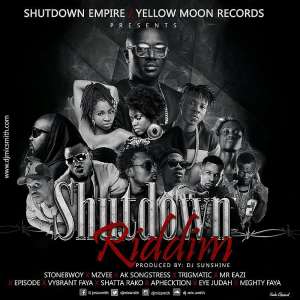 Dj by trade, Mic Smith is one of the most innovative and influential dj of his generation. Of course you can't do without mentioning his as one of the household names in Ghana ever since Disc Jockeying (DJ) gained it's grounds in the entertainment industry. He is regarded as the nations crowd holder.

After tearing up stages with his dexterous spinning moves, he also leaves a trace at every nightclub he operates. The ladies' man is officially annoucing the readiness of the artwork for the Shut Down Riddim and the date to the release of the signature anthem of his well established and known trademark "Shut Down King". 10th August 2015 is the date you should circle out on your calendar because the music mixologist extraordinaire is officially releasing his long anticipated mixtape which features talent factories such as raining VGMA artist of the year and BET best international act Africa Stonebwoy, Ak Songstress, Mzvee, Trigmatic, etc. The mixtape is promising, power packed, and infact, mind blowing.

Whether presiding over his project or just supporting an industry colleague, Mic Smith is a force of nature: a supremely clever mixologist and producer. This is just a tip of an iceberg; wait till you feel the musical force behind the Shut Down Riddim.

Check out his official website for more information about Mic Smith www.djmicsmith. com.