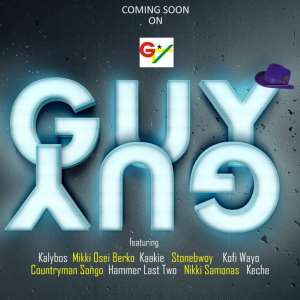 An all new overly hilarious TV Series called "Guy Guy" is set to hit the screens this August on GTV - Ghana's National Television.

The BET 2015 "Best International Act" for AFRICA, Stonebwoy, is featured in it with a vivid line up of Ghanaian music icons like Kaakie, Keche, Kobby (formerly of Wutah fame), Choirmaster (formerly of Praye), and many others. It also features Hammer of 'The Last Two'.

The star studded series which headlines ace Ghanaian quipster, Kalybos, as the main character has a fine juxtaposition with Mikki Osei Berko (another awesome character known on screen for his 'twists and turns' on situations - then comes Nikki Samonas, the 'Bikini Queen' - who can be described as one of the funniest actresses in Ghana you might not know about until the series unfolds that scintillating side of her.

Kofi Wayo is also another vivid character in "Guy Guy" nobody would want to miss. For some time now, Kofi Wayo seem to be 'missing' in the eyes of the media - with this TV Series, his fans will feel their connection with him as he engages audience with his voluptuary.

"Guy Guy" Series is written and produced by Ghanaian rapper, 2ras and directed by Kofi Asamoah of "Kalybos in China" - it was shot on various locations in Accra.

Viewers of this new series should expect nothing but a well packaged comedy. Season 1 of "Guy Guy" series promises quality TV content full of drama.