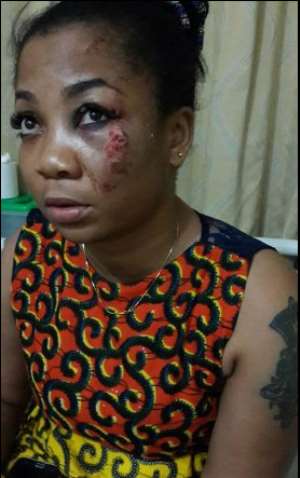 Actress Vicky Zugah was involved in an accident Wednesday dawn after a KIA truck left her car damaged and her left eye bloody, swollen and pieces of broken glass left on the eyeball.

Vicky said, the accident happened around 2am while she was returning from a movie shoot at UPS near Madina, Accra.

Whilst on the Tetteh Quarshie- GIMPA  road, the driver of the kiosk-carrying-KIA truck veered into her lane and crashed into her side door, rammed into her driver's mirror.

Her windshield was badly damaged from the impact, leaving shards of glass all over her face.

'I was trying to give it way because it had occupied part of my way, so while I was parked by the side, he drove straight into my windscreen' she explained.

The driver sped off after the accident.
She is consistently teary in the affected eye.
“[Doctor] suspects pieces of the glass might be in my eye because my eye keeps getting red…there is blood on it and it keeps spreading all over and the swell wouldn’t go down”, she said.

The actress has since been hospitalized at the Lapaz Community Clinic expecting to be transferred to the Korle-Bu Teaching Hospital for specialist treatment on the eye.

The single mother has a large number of movies to her credit: Keeping the Promise, Twisted, The Bible, My Dearest Princess, Girls Connection, Stand by me, Agatha, Pretty Queen, The Bible, The Return of Beyonce.