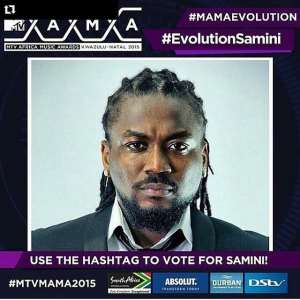 Renowned for his live band renditions, Samini continues to make big strides in his genre of music, African dancehall; with over a decade of constant contribution to the music industry. Samini undoubtedly has mastered his craft by ensuring that he enhances his creativity by working with the best of producers to provide contagious sounds for his fans and new listeners.

Samini's steadfast approach towards music is what has landed him his latest nomination by MTV MAMA. The category titled "The MAMA Evolution" is set to honour established artistes who have made an indelible mark on African and global music culture. Also by taking African music to new territories around the world, pushing the boundaries of creativity and shaping the soundscape of contemporary Africa.

It can be said that this nomination is timely as Samini is gearing up towards the release of his 6th album titled "Breaking News", which has been a gradual development of sounds best to portray the next realm of Samini's musical career.

When asked what the new nomination from MTV MAMA meant to him he stated, "It is always a great feeling receiving a nomination especially one from MTV, as we all know they have made a huge contribution to the musical landscape of Africa. It has afforded us the avenue for our songs to be cherished and valued as quality contributions to the global music arena. The nomination from the MTV MAMA Evolution encourages me as an artiste to focus more on quality sounds as well as sustenance in terms of my delivery and releases. Thus my team and I continue to work tirelessly to produce only quality sounds and well nurtured compositions. I see the votes coming in already, thanks everyone lets go grab this."

To vote for Samini to win " The MAMA Evolution"

Vote by
1. Kindly visit www.mama.mtv.com and click on Samini