I Want To Combine Acting And Music—Nana Ama McBrown 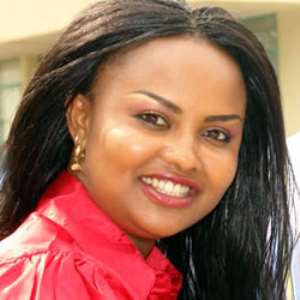 besides being an outstanding actress she's also good in singing and

would like to combine both careers.
The Favorite actress in the maiden edition of Golden Movie Awards

her time in order not to stuck on her way.
"I want to...but because both of them are time consuming, I have to

take my time. I just don't want to come into it now and stuck on the

way, sometimes you have to read the system slowly, sing for the people

to know that Nana Ama Mcbrown can also sing."
According to her, Its very hard for people to accept such transition.

musician, the people find it difficult to accept him/her, you have to

prepare the mind of the people before you venture into that."

edition of the Golden Movie Awards as the favorite actress.

with me for the award of which I hoped to win and thank God I won. It

was exciting, It was nice and very beautiful, I wish I can explain."

funs to expect more from her in the coming years.
According to her, she has faced a lot of challenges but she's able to

overcome them.
"Challenges, I have had a lot but the point is you should be able to

overcome them as long as you live. I see the challenges in the in the

industry as part of life, so whatever challenge that may come on my

way, I am ever ready to face it and overcome it."

The actress advised upcoming talents to access themselves very well

before chosen acting as a career.
"First of all, it's God who bless humanity, and there are two things

involved in this profession, its either you were born with it or you

learn to be perfect. Access yourself before you think of chosen acting

as a career. If you don't see yourself being perfect, then don't

overlook that feeling and waste your time in this industry. It will

than in the acting profession. Acting is a gift from God," she