Who Is The ‘New Guy’?—King Ayisoba Questions 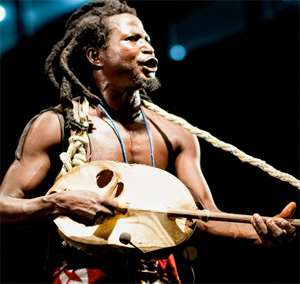 King of "Kologo" music & the most successful traditional artiste from the northern part of Ghana, Albert Apoozore, internationally known as King Ayisoba is currently touring Europe & has already performed in Poland, Germany ,Holland ,now in France.

The most toured Ghanaian artiste presently & the only traditional artiste to win the coveted overall top award at the GMA now VGMA in 2007 with his hit & educative song; 'I want to see My father,' told Dj Murphy Lee, the host of entertainment extra show on Metro Fm in Sunyani on telephone, all the way from France that, he knows nothing about Sarkodie & American rapper Ace Hood's collaboration of the song titled "New Guy"

"Torrr", Who is New guy? I don't know anything about that song .I'm busily touring Europe by playing big festivals so I have no time for what... is it Old guy or Gentleman?", King again answered.

"Oh, oh!! New Guy. Hmmm .That's nice. But frantically, i know nothing about it." He also noted.

King is out with controversial " "wicked leaders" song which he denied doing the song to malign President Mahama & his administration.