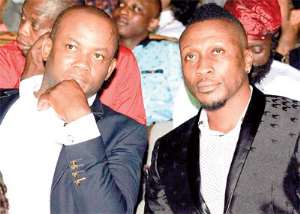 All roads in Kumasi will, on June 21 this year, lead to the Baba Yara Stadium where a crunch football match will be played to raise funds for charity.

Black Stars players and former national stars, forming one team, will lock horns with a team of music stars and people from the creative arts industry.

Ghana skipper Asamoah Gyan and Emmanuel Adebayor of Togo will be playing for the musicians and creative arts team on the day.

He announced that Agya Koo, Lil Win, Funny Face, Nana Ama McBrown, Tinny, and Samini, among others, would play for the musicians and creative arts team.

He said Dede Ayew, Sulley Muntari, Kwadwo Asamoah and stars from Tottenham and Ivory Coast would play for the Black Stars and ex-national stars squad.

Anim Addo was speaking at a press conference in Kumasi on Wednesday, which was graced by Tinny, D Black and Kwaku Manu, among other stars.

People who will want to watch the game will be required to pay a fee at the gate. The proceeds of the game shall be presented to the underprivileged in society, including orphans and the aged.

He said before the match, a road show in which the stars would drive in a convoy of flashy cars from Accra to Kumasi would take place on June 20.

This year's historic event, which will certainly attract massive patronage, is under the theme, 'Observing good sanitation practices for better health.'

He announced that the stars would also embark on a cleanup exercise in Kumasi to educate the people to keep the environment tidy before the game.

Right after the cleanup exercise on June 21, the stars would donate to charity in Kumasi before visiting the Baba Yara Stadium to compete for honours, he added.