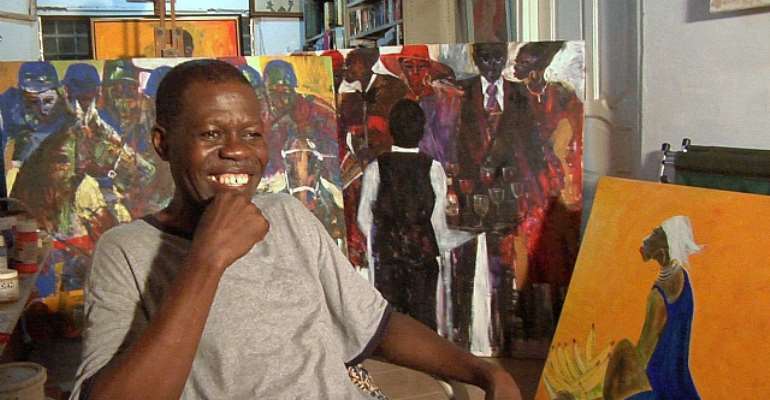 SHOWCASE and Bureau Africa have now released the film interview with Larry Otoo on THIS IS AFRICA, the 7th interview in their series of film interviews with prominent Ghanaian contemporary visual artists under the title "The Black Stars of Ghana - Art District". The interview with Larry Otoo followed on the previous episodes about Wiz Kudowor, Ablade Glover, Gabriel Eklou, Kobina Nyarko, Marigold Akufo-Addo and Kwadwo Ani. The interview series which is currently internationally launched uses the internet to introduce the representatives of contemporary Ghanaian art to a global audience. For both art lovers and art experts it provides a fast and concise insight into today's contemporary Ghanaian art scene.

Larry Otoo was born in 1956. Already his art teacher at secondary school foretold him that his talent would sometime allow him to pursue art up to a very high level. Only his father, an economist, was not enthusiastic about such plans and wanted him to study economics. But Larry Otoo bypassed his father and applied to study art at the Kwame Nkrumah University of Science and Technology in Kumasi. There at the College of Art he was graduated in 1981 as a painter and also with a master's degree in African Art and Comparative Literature. During his studies he learned about the various ways in which the different ethnic groups in Africa were practising art and he understood better the cultural differences and the cultural diversity between nations and ethnic communities in West Africa and beyond. This understanding helped him later in his work as an artist to implement cultural and social influences from very diverse sources and to create a personal artistic style out of these inspirations.

The daily impressions, the way the people talk and move and work in public settings, the very details of life provide the subject matters of his paintings. Sometimes described as a 'contemporary traditionalist', Larry Otoo paints to recreate his perception of what was happening at a certain moment in time, capturing the 'living installation', as he calls it, that he witnessed and recorded in his surroundings. A "social commentator" rather than a political artist, he uses paintings to document contemporary social life both in the West African environment and beyond and he visualizes the human condition as he sees it in everyday life.

Larry Otoo's subject matters have changed in the course of time. Whereas he started with depicting traditional market scenes 15 years ago, he currently prefers contemporary themes like jazz music, polo competitions, aspects of the life of the bourgeoisie, people playing cards or chess. But still in the way he alternates in his stylistic tools between realism, expressionism and abstraction, a highly sophisticated ability to make use of the various possibilities of artistic expression is revealed. He creates the particular visual effect of his paintings not only by means of a carefully balanced, yet powerful colouration, but also through their contextual rhythm and surface texture.