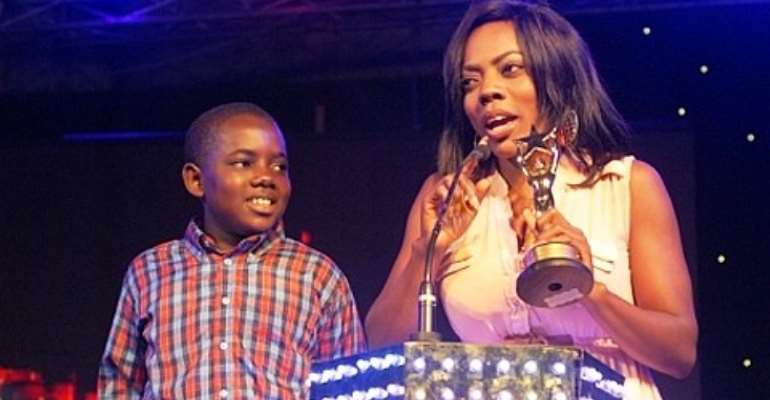 Winning the "Television Newscaster Of The Year (Female Category)" presented the lovely host of the "Divas Show" and eloquent TV3 news anchor Nana Aba Anamoah the perfect opportunity to showcase to the world her 11-year-old son "In whom she trusts."

As Nana Aba publicly showed off her son she was psychologically waging a campaign, "Don't Abort That Pregnancy", for children are a gift from God.

In so doing, Nana Aba succeeded in tickling the emotions of patrons who had thronged the Dome of the Accra International Conference Centre to be part of the second edition of the Globa RTP Awards.

Speaking in an interview with the Weekend Finder, she said she damned the consequences to do what a few celebrities would dare do publicly, especially single mothers.

Nana Aba, on the night, walked confidently upstage after she was announced winner of the category, with a young boy, to receive her award, leaving many wondering who the chap was.

After receiving her award, Nana Aba introduced the young boy as her son and then presented the award to him live on stage, telling him he had been an inspiration to her so she was dedicating the award to him.

This was indeed emotional and according to Nana Aba, she did all that because her son had truly been an inspiration and had always understood her as a single mother.

"My son is indeed my husband and boyfriend and I live him," she said with passion.

Nana Aba recounted what she went through when she gave birth just after Senior High School, adding that "my son has always understood me as a single mother and there are times that when school reopens, my son will tell me to hold on with his school fees if I did not have money immediately to pay for it, but knowing how important his education is to me, I always made sure I paid his fees at the beginning of the term."

Speaking passionately about her relationship with her son, she said it was a bond that could never be broken, recounting how her son told her that though some children were single-handedly taken care of by their mothers, they went back to their fathers when they grew up and he made a promise to her that he would never go back to his father.

she said however that as touching as that promise was, she told her son not to say that, telling him that it was circumstances that had made it so, encouraging him that should his dad come back someday to apologize to him, he should forgive him.

She spoke of how she had seen a conversation between her son and his father on facebook in which the son had not been too kind with words for his father but she advised him to learn to forgive and also let go.

Nana Aba used the opportunity to advise young ladies not to give up in life when they come across challenges like teenage pregnancy and cautioned them never to try to abort those babies, adding that it was always better to have protected six if they had to do it.

Nana Aba said she was not endorsing teenage pregnancy but if it happened, abortion should not be an option.

"Having a child out of marriage is not a crime though it is not the ideal situation in our society," she cautioned young ladies.

She said they should not give up but rather see the challenge as a blessing in disguise.

She said, “if you are able to endure and overcome you will definitely make it in life".

she said since last Saturday, she had received numerous calls from young ladies who told her how her story had inspired them and were willing to open up to the public and tell their stories.