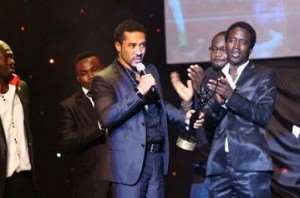 The actor has been nominated for one of the world's most recognized and prestigious award ceremonies called 'Planet Africa Awards'.

The 2012 edition of the Planet Africa Award programme is described as one of the biggest awards in the world.

This year's will take place at the Roy Thomson Hall, Canada, on Saturday, October 27.  It will begin with a VIP dinner, followed by the exciting awards presentation.

The award is aimed at identifying role models, especially for the youth, as it recognizes individual and organizational performance at the national and international levels.

Among other elements, the event features world class entertainment as it also identifies and recognizes deserving individuals, organizations, businesses and agencies that make a profound difference in society and the lives of people of African heritage.