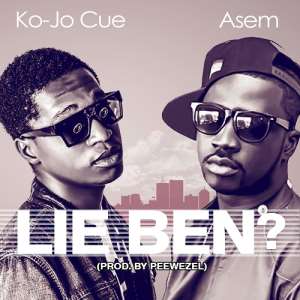 Nana Wiafe Asante Mensah popularly known in showbiz as Asem changed the game with his 'Gimme Blow' single, perhaps, at a time when it seemed to be lacking direction and lagging. His controversial track, 'Gimme Blow' became the most sought after and most shared or “bluetoothed” song among Ghanaian youths when it was unofficially released that time. But what makes this collaboration unique? It's simple, they both share some clear commonness and perhaps ASEM sees traces of himself in Ko-Jo. Just like ASEM, KO-JO's style is enjoyed by urban youths mostly but his combination of Pidgin with English lyrics laced with Twi makes him appeal to rural Ghana as well. After churning out hit songs over the years the award-winning rapper cum journalist now plans to do it again by throwing his weight behind one of the newest acts whom critics have touted as Kumasi's answer to the Hip-Hop game, Ko-Jo Cue. The up and coming artist, who is known in underground circles as the Punchline King (PLK) and loved by many GH Hiphop lovers for his lyricism and consciousness, is set to release a new single 'Lie Ben' which features Asem with production from Peewezel for CUE Studios.