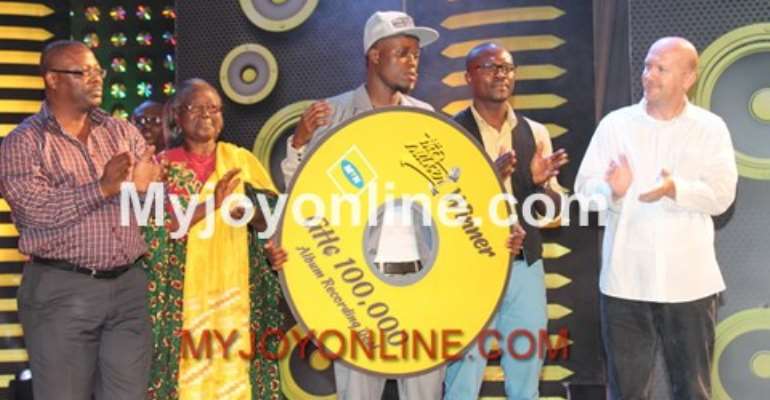 Young musician Shadrack Adjei popularly known as Naterial was at the wee hours of Saturday crowned winner of the maiden edition of the MTN Hitmaker reality show which came off at the Accra International Conference Centre.

Naterial beat three other contestants, Miriam, ATM (Atimbila) and Chiki to win the ultimate prize of a management and recording deal worth GHc100,000.

Gospel musician Miriam Afari Affiaku, popularly known as Miriam emerged first runner-up and walked away with a deal worth GHc50,000.

After 13 weeks of intense competition and painful evictions, 12 hopefuls were slashed to the finale four who knew that dream to the promised land was four hours of skill and nervy moments ahead of them.

Before the winner was announced by MCs Bola Ray and Nana Aba Anamoah, the finalists had to go through two rounds of performing their own songs and collaborating with the main stars for the night.

During those thrilling performances, it was Naterial who was the most impressive prompting chants from the packed Conference Centre that he was the obvious winner. Patrons always went gaga each time he performed.

Judges for the reality show, Zapp Mallet, Bessa Simons and Ofie Ofuatey Kodjoe, were just impressed with the performances on the night.

Naterial told Myjoyonline.com in an interview that, “In every competition there is one winner. I said to myself even if they give me the second or third I will be ok because I will still manipulate my musical career but God being truthful and God being a very great person for Naterial, for now, I think Naterial is planning a whole lot of things. Ghanaians should expect all the best from me.”

Apart from the stiff competition from the finalists, there were also some exciting performances from Kaakie, Samini, Ohemaa Mercy, Guru, Kwaw Kese and Nigerian music star, Davido.