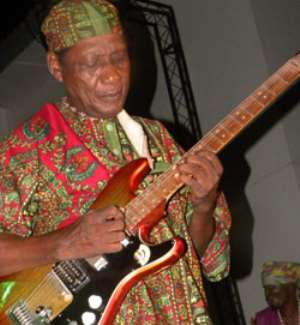 A highlife music fiesta dubbed 'A Night with Ebo Taylor,' will on Thursday September 20, take place at the Alliance FranÃ§aise in Accra.

Taylor, who would mount the stage with his band, Bonze Kokoma, has been touring several European cities in recent years. Undeniably, he has been a fundamental figure on the Ghanaian and international music scene over the past six decades.

In the late 1950s he was active and highly influential with a number of highlife bands in Ghana.

He later went on a tour of the United Kingdom with the Black Star Highlife Band - a move that led to collaborations with Fela Kuti and other African musicians.

He has worked as a producer and was involved in the recordings of several musicians including Pat Thomas and C.K. Mann. Taylor enhanced his musical career by fusing traditional Ghanaian rhythms with Afro-beat, jazz and funk to create his own peculiar sounds in the 1970s.

In recent years, he has become famous among hip-hop producers. Indeed, this has resulted in diverse collaborations including the release of his first internationally distributed album 'Love and Death' on Strut Records in 2010.

The concert was being sponsored by the French Institute in collaboration with the Alliance Francaise in Accra.