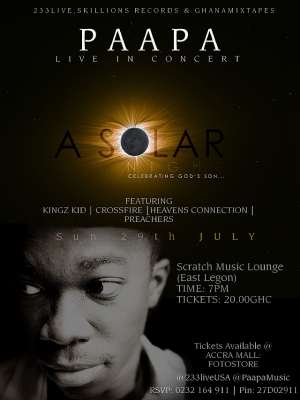 Skillions Records' artist and producer Paapa, is fast becoming a maverick in Ghanaian music, consistently pushing musical boundaries and blurring thematic borders. On Sunday, the 29th of July 2012, the Scratch Music Lounge will experience a show like never before. 233 Live, Skillions Records and GhanaMixtapes partner to bring you 'A SOLAR NIGHT': Paapa live in concert with Kingz Kid, Preachers, Crossfire and Heavens Connection.

Paapa released his debut digital album in pieces over the past few months, on selected Sundays called 'Solar Sundays'. This concert will be the final 'Solar Sunday' showdown, celebrating the success of the album. It is also a celebration of the new wave of urban contemporary Christian music being championed by the artists on the bill.

Back home in Ghana for the summer, Paapa has been consistently performing at numerous gigs including Accradotalt's 'Talk Party' in June, and NMA's art exhibition earlier this month. An ardent fan tweeted saying “@PaapaMusic amazing amazing artist. Was blown away...loved watching him”. Hot on the heels of his successful '233 LIVE's Paapa Unplugged' back in mid-June, Paapa now shares the stage with colleagues from the urban contemporary Christian music scene in what promises to be a very thrilling, historic and powerful event.

Tickets are available at the Accra Mall (Fotostore) for only 20 GHS. The Scratch Concert Hall (Music Lounge) is adjascent the Guest Hotel on the top floor of MTN Office Building.