Adele and One Direction prop up US album sales 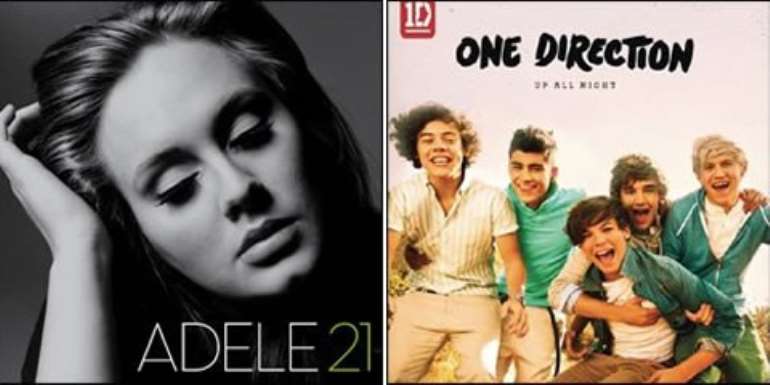 Adele and One Direction have helped stem the decline in US album sales, which dropped just 0.6% in the first six months of 2012.

Boy band One Direction take third place in the chart, shifting 899,000 copies of their debut, Up All Night.

In total, 220 million albums have been sold this year, analysts Nielsen said.

Overall, the US music market continued the recovery that began last year.

Total music sales - including singles, albums, music videos and digital tracks - stand at 853 million, up from 820 million in 2011.

Digital sales from stores like iTunes and Amazon have largely been responsible for reversing a slump that has affected the industry since 2004.

Sales of digital albums were up 13.8%, to 57 million, offsetting a continued decline in physical album sales, which dropped 3% from 155 million to 150 million.

Vinyl is also experiencing a resurgence, with 2.2 million albums sold so far this year (up from 1.9 million in 2011).

The most popular vinyl release was Jack White's first solo album, Blunderbuss, which does not feature at all in the main best-sellers list.

However, CD is still the dominant format - responsible for 91 million sales, or 61% of the album market.

According to Nielsen, the top 10 best-selling albums are:

Adele's 21 was also the most successful album of 2011 in the US, shifting 5.82 million copies - the highest 12-month sales figure since Usher's Confessions sold 8m copies in 2004.

Before the advent of Napster and other illegal download services, America's most popular albums rarely dropped below the five million figure.

In 1999 and 2000, the Backstreet Boys and 'NSync managed to sell in excess of nine million copies of their albums.