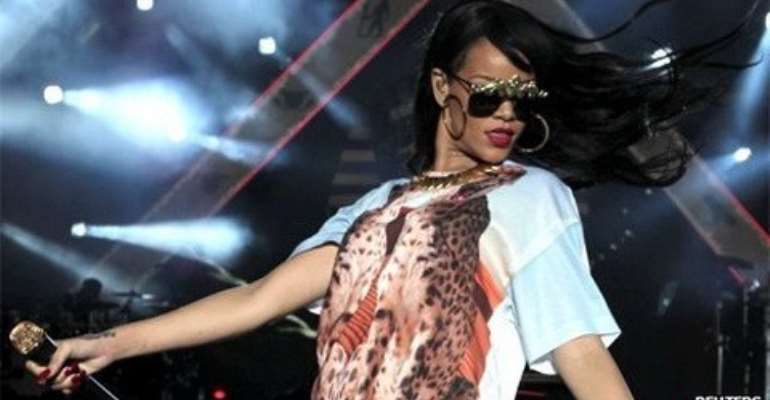 She opened her headline set with Only Girl In The World, performing in front of a giant sphinx.

Her mentor Jay-Z took to the stage for a run of three songs. The pair had also performed together during Jay-Z's set on Saturday night.

After her third track, S&M, Rihanna ran into the audience to ask for help re-attaching the battery pack for her microphone, which had become loose during a high-energy dance routine.

She closed the set an hour later with We Found Love, her global number one hit from last year.

Rihanna review: 'History' in Hackney
"You guys are making this such a memorable show for me," she said before she left the stage.

'Incredible'
Earlier on Sunday, Florence and the Machine performed on the main stage, followed by Dizzee Rascal - a surprise addition to the bill.

Dizzee, who grew up in Bow, near the Hackney Marshes venue, paid tribute to "my east London crew".

He recalled his days as a "pirate radio MC" in London before his self-produced single I Luv You landed him a record contract.

The second day's bill was packed with local artists, including rapper Tinie Tempah, who premiered a new, untitled, song produced by Calvin Harris.

"East London is the epicentre of a lot of cool things at the minute," he said. "Radio 1 coming to Hackney Marshes is so incredible. I could wake up and just walk here."

Rapper Plan B - whose set coincided with a sudden rain storm - added that the festival was important for the local area.

"For so long, this part of the city has been deprived. It's great to see stuff like this happening here, because the people deserve it."

Jessie J was an early favourite on the main stage, particularly with younger members of the audience.

She was joined on stage by US rapper B.o.B for their hit single Price Tag. "This is only the second time we've performed it together," she told the crowd.

"I really enjoyed myself," she said afterwards. "I'm kind of pacing myself a little bit more this year and just making sure that I'm focused on the vocals.

"I just really want people to enjoy the singing element of it all. The crowd were incredible."

Noir pop artist Lana Del Rey performed an acoustic set backed by a chamber orchestra at the In New Music We Trust tent.


"The crowd were really receptive, really good, so that made it easy," said the Video Games singer afterwards.

"I didn't have my drummer with me - so it was stripped back, almost like a jazz set. It's really all about me and the crowd."

"I'd like to thank the young people of Hackney for welcoming Radio 1/1Xtra over the past three weeks - from those who got involved in the academy to those who enjoyed the amazing line-up of UK and international artist this weekend.

"It's been an inspiration."
Authorities treated the festival as a "dry run" for the summer Olympics and, by and large, it proved to be a peaceful weekend.

London's Metropolitan Police said the atmosphere had been "calm" on Sunday. Saturday saw about 50 arrests outside the arena. Most were for drugs and knife possession.

Highlights from the event, which was part of the London 2012 Festival, are available on the BBC's Hackney Weekend website.