I'd Love To Act In Akan - John Dumelo 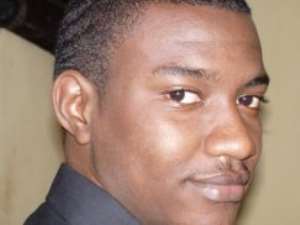 Ghana’s star actor, John Dumelo, has been speaking about his desirte to act in Akan language movies and play roles which would endear him to local language speakers as he has done in the past many years with locally produced English language movies.

“It’s such a pity that all these years, no producer has approached me to feature in a local language movie although every week, many such movies are produced in Kumasi, Accra and other cities”, Dumelo toldShowbizlast week.

The popular actor was responding to a charge by fellow actor, Emelia Brobbey, who last month(Graphic ShowbizAugust 25, 2011) slammed her colleagues for ignoring local language movies in preference to English language ones. “Every good actor should be able to act in any movie regardless of the language as long as you can speak it. So if you can speak Twi fluently but can only act in English then it means you are not that good”‘ Emelia said.

But Dumelo would not agree with Emelia. “I totally disagree with Emelia Brobbey if she says actors who feature only in English language movies are not good. I speak very good Fante, so I don’t believe it would be very difficult for me playing in Akan movies once the script is good.”I blame the local language producers who appear to target some actors and neglect others”, Dumelo said.

Not all actors share Dumelo’s position. Prince David Osei told Showbiz that he would not play in Twi movies because “ many Twi movies in Ghana are not attractive. I have had the opportunity to see a few and I don’t think I would like to feature in any of them yet”, he said. “Acting in Twi is relatively easy, anybody at all can act once the fellow is told what to do but acting in English is not that simple.

“This is not to say all Twi movies are unattractive; some of them have good story lines but I look beyond just Ghana and Nigeria, my target is Hollywood.

Versatile actress, Portia Asare Boateng, holds a different view. According to her, actors who play in both English and Twi language movies should be rewarded. In her view the problem has to do with producers who have given the English language actors too much privilege over Twi actors.

“But many of the English language actors are nowhere near some of us. Unlike Agya Koo and a few others who do not use scripts, some of us translate whatever script we have from English to Twi before acting; that alone should tell you that Twi actors are better than the English speaking actors. The English actors memorise the script and pour it just like that. For Christ’s sake, we are in Ghana and not Europe”, Portia said.

On her part, Roselyn Ngissah said that each actor and the movie he or she is comfortable to feature in. If I feature in only English movies that is not to say I am not a good actress, I may decide not to feature in the Twi ones, but who knows, I might probably do better than those already starring in Twi movies. It depends on the character and the kind of script he or she prefers to act. But if a good script in Twi is given to me, I would not object to it.

According to Ebi Bright if her Twi was good she would have loved to play alongside any Twi actor. I love the Twi movies, in fact I respect them to the max, most people speak Twi but acting in Twi is not that simple. How many Akans can write their own language perfectly?

Emmanuel Armah would not react directly to what Emelia said but seems to be very peeved with the English language movie producers whom he says are not calling him for roles for reasons best known to them. He has starred in some Twi movies and cannot tell if that is the reason they are not inviting him for roles. “The English producers do not pay very well and they sometimes behave as if they are doing you a favour, but if it is the English movies that can take you to Hollywood why won’t I do English movies?

According to Emmanuel, Agya Koo is the highest paid actor in Ghana, so acting is acting regardless of whichever language it is done in.