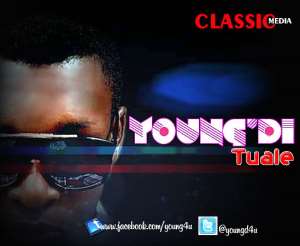 YOUNG'DI has just droped a new single titled TUALE. he has also been listed out wit other artiste like TWIA SAVAGE, DAVIDO, GOLDIE, WEIRED MC, AZEEZAT, WIZKID as one of the major Artiste performing at the coming up MR UNIVERSE NIGERIA PAGEANT on the 16th of june @ SCINTILLA LEKKI LAGOS.