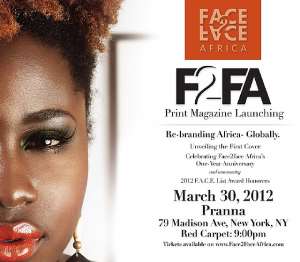 New York, New York- March 28, 2012- All roads lead to Pranna Lounge in New York City this Friday for the grand Launch of F2FA Magazine, a new global multi-niche magazine with the mission of Re-branding Africa and providing a platform for Africans to tell their own stories.

F2FA recently caught up with the reigning Miss Universe, Leila Lopes, who became the second African to win the Miss Universe pageant after competing against several women around the world for the prestigious title. Leila tells F2FA Magazine how important the image of Africa is to her, and what she is also doing to help re-brand Africa.

World renowned fashion model, Alek Wek, who has been a strong advocate for Africa and her home country Sudan, will be making an appearance at the launch on Friday. Also expected are the reigning Miss Africa USA, Ghyslaine Tchouaga, celebrity trainer and boxer, Hollywood Hino, and a few other surprise celebrity guests.

The guest list for the launch includes influential leaders, business executives and entrepreneurs, artists and entertainers, and more. In addition to unveiling the historic first cover of F2FA Magazine, Face2face Africa will also announce the 2012 F.A.C.E. List Awards Honorees who will be celebrated at the award show in June.

The red carpet starts at 10pm and early arrival is highly suggested. Purchase advance tickets to avoid paying more at the door, waiting on line, and be entered into a raffle to win 2 round trips to Africa, courtesy of Arik Airlines.