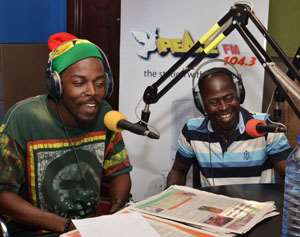 A number of celebrities from both the music and movie industries yesterday celebrated Ghana's 55th Independence anniversary in the studios of Peace FM, an Accra-based radio station located at Abeka Junction.

The stars, who visited the station in their numbers, were made to host some of the station's programmes such as the morning and mid-morning shows, among others.

Abrantie Amakye Dede was made to read announcements on the morning show which was hosted by Hon. Kojo Adu Asare, NDC MP for Adenta, with support from Kwaw Kese, who did the newspaper review.

Rebbecca Acheampong aka Becca, whose music has made an impact on the Ghanaian music scene, read the station's 10 o'clock news bulletin.

Other stars who took over various shows included Koo Ofori, Oyeame Kwame and Afia Schwarzenegger, with the Deputy Director of Communications for the New Patriotic Party (NPP), Sammi Awuku, hosting the mid-morning show.

A section of radio listeners who visited the station interacted with their favourite stars, took pictures and danced with them, and also got autographs.