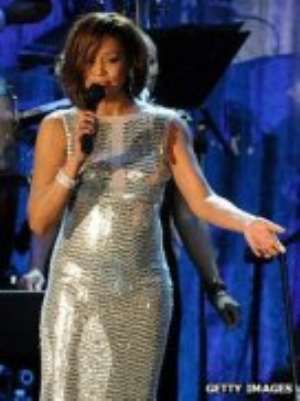 A Los Angeles coroner has said there were no signs of foul play surrounding the death of singer Whitney Houston.

After a post mortem examination, the coroner said there were no visible signs of trauma on Houston's body and that foul play was 'not suspected at this time'.

He added officials were not ruling out any causes of death until they had the results of toxicology tests.

The star was found dead in the bath in her Los Angeles hotel room on Saturday.

The coroner said he would not release any more details on the post mortem, performed on Sunday at the request of police detectives investigating the singer's death.

Meanwhile, the music world has been remembering her life and career at the Grammy Awards.

Host LL Cool J opened the event with a prayer for the singer, who won six Grammys during her career.

'There is no way around this. We've had a death in our family,' he said.

'The only thing that feels right is to begin with a prayer for a woman who we loved - for our fallen sister, Whitney Houston.'

The audience then gave a standing ovation after watching a clip of her hit I Will Always Love You.

Dressed in black and with a simple piano accompaniment, singer Jennifer Hudson later gave a moving rendition of the same song, ending with the line: 'Whitney, we will always love you.'

'To Whitney up in heaven, we all love you,' echoed Stevie Wonder.

Melanie Fiona, who won best traditional R&B vocal performance and best R&B song, said: 'Whitney Houston, I would not be standing up here if it were not for you.'

Reactions to Houston's death dominated the ceremony, the most high-profile event in the US music calendar.

Before the show, Jimmy Jam, a friend and producer of Houston's, said it was 'a bitter-sweet occasion'.

'Anytime someone passes away, the thing you do is you gather your family together [and] tell stories,' he said.

'A little bit of mourning, little bit of celebrating - this is our family tonight and we're going to do it the best that we can do it.'

Earlier on Sunday, the Reverend Al Sharpton paid tribute to Houston while preaching at the Second Baptist Church in Los Angeles.

'Yes, she had an outstanding range,' he said. 'Yes, she could hit notes no one else could reach.

'But what made her different was she was born and bred in the bosom of the black church.

Meanwhile, Houston's 18-year-old daughter Bobbi has been released from hospital after being treated for stress and anxiety following her mother's death.

Houston holds the record for having the most consecutive chart-topping singles in the US, reaching number one seven times between 1985 and 1988.

But her later career was overshadowed by substance abuse and her turbulent marriage to singer Bobby Brown.

In recent years drug use had taken its toll on the star and her voice - once acknowledged as one of the finest in pop music - was badly damaged.