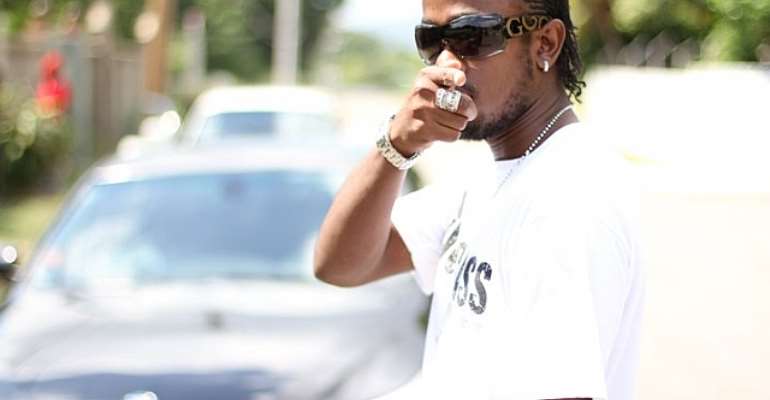 Dancehall Eton 'Calado' Gordon is keen on making a mark for himself this year. The artist who has been a member of Bounty Killer's

that he is looking for.
The artist was also the Jamaica Star nominee for 'Upcoming artist of the Year 2011' and has been performing across the island on a regular note since his

induction in the ANG camp. "Since being apart of ANG i have been getting more recognition by fans and people in the music business, i have also gotten the

opportunity to perform more regularly at stage shows across the island and a few major ones. My songs are being played more regularly on the radio, selectors and

disc jocs and giving my music more plays in the parties and dances and people are taking my career more serious, so its a good look overall"

Songs such as Carry On, Provide, Nuh Gal cyaa Tear Mi have been getting regular rotation on radio and in parties for 2011 and he wants to capitalize on this by working

even smarter for 2012.
Since the start of 2012 Calado has hit the ground running and has already recorded and released 3 tracks showing different sides to his versatility. A track titled

'Life On A Whole', produced by Payday Music Group (Bad Into Riddim) where the artist expounds on the rough times that people go through in life, on a whole. Another track titled "Calado

Lyrical' on Payday Music Group's lyrical Overdrive Riddim sees the artist spitting some unusual ryhmes and flows that is definitely a 'Next Generation' flow and style,

but, it may be the song titled 'Sex Mi Mind Deh', produced by Cash Flow Records that seems to be creating quite a stir. An underground video has been done for the song

and seems to be doing well as it has racked up over 8,000 views in 5 days and the artist is in the process of recording a radio edited version of the song based on

the love it has been getting from fans worldwide. To view for yourself here is the link for the youtube video http://www.youtube.com/watch?v=nazvzkM4u40.

video 'Provide' and his tracks. He has distributed over 5,000 CDs in the last year and aims to go even harder this year. It is definitely expected that Calado will

create an positive impact in dancehall worldwide, he limits himself to no one genre as he believes music is much bigger than one genus, but, embraces dancehall as his

roots.
"I am a dancehall artist, but, my music transcends all boundaries, I listen to all types of music and fuse what i think is best. creativity is what i am full of so

i can listen to anything and do it in my own style and flavor. I must give thanks to Bounty Killer first for giving me this opportunity a my General dat, big up Cross

Cris cause a real yute dat, he is the one who really took me to Bounty Killer. Big up di whole team around me cause the work is paying off, as Icon say 'Don't worry

about howcome it's all about the outcome', Dre Day and di whole team nuff respect and to my street team keep doing the good work".