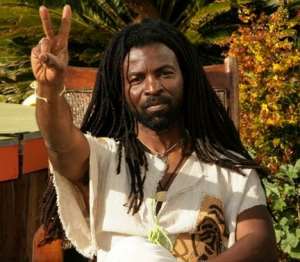 Congratulations to our brother; Los Angeles based Lucky Dawuni who has made us all proud.

Celebrated Ghanaian and international Reggae artist, Rocky Dawuni, has been listed in CNN's ten of the African continent's most famous and much-loved musical exports.Rocky, widely acclaimed as Ghana's Bob Marley, has over the years raised high the flag of Ghana in international circles and has performed to audiences across the world as well as working with music legend, Stevie Wonder.

He has been nominated and won several international awards from his last album, Hymns for the Rebel Soul which was released earlier this year. The awards include, Best African Artist at this year's International Reggae and World Music Awards (IRAWMA) and NAACP Image Award nomination for “Outstanding World Music Album”. The world acclaimed Ghanaian singer, now based part time in Los Angeles, was featured on CNN's African Voices in September this year.

Rocky Dawuni is the only Ghanaian in the featured list, which is dominated by Nigerian artists. Sensational singer Asa, Nneka and 2Face Idibia make up the Nigerian artists in the list. Other renowned artists who made it to the list includes; Senegal's Youssou N'Dour, Mali's Salif Keita and Somali-born rapper K'naan who shot into international fame with his 2006 album, Dusty Foot Philosopher. Amadou et Mariam, duo from Mali also considered one of the continent's biggest artists. The duo, since meeting at Mali's Institute for the Young Blind in the 1970s, has received international recognition for their musical diversity.