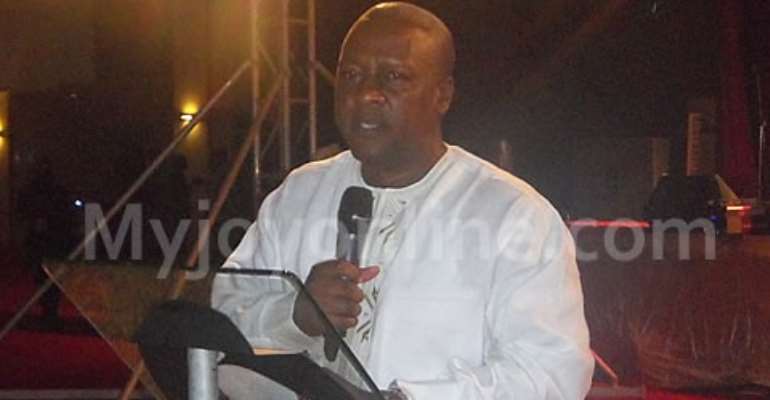 The government has reiterated its pledge and commitment in helping the creative industry fight piracy, which has become its nemesis for years now.

The Vice President assured that, “Government is prepared to work with MUSIGA and the creative industry to device means to clamp down on piracy,” urging MUSIGA to come out with ideas which the government on its part “will help you with the enforcement and lets enforce anti-piracy laws so that, musicians, actors and other creative people are able to get the full benefit of their creative works.”

John Mahama however called for unity in the creative industry so that with one voice, they could be heard better: “the more splinter groups you have, the less united you are and the less you can speak with one voice and defend your interest.”

The Vice President said even though the constitution guarantees free association, “I think that in your industry, you need to belong to one association that speaks with one voice on your behalf and that's the way that you can achieve your objectives.”

Touching on the recent Two Million Ghana-cedi budgetary allocation to the music industry in the 2012 budget, John Mahama said government has been working on the phase two of the poverty reduction strategy and as part of that strategy, government recognizes the creative industries as a very important industry in Ghana's private sector in terms of job creation, income generation and developing the talent of people.

“The creative industries are recognized as an industry that government must help to expand in other to create jobs for our young people.”

He called on MUSIGA to help device a mechanism to help assist 'aged' musicians who did not have the luxury of protection musicians are enjoying today stating that is the surest way for them to also get something for their works.

Bice Osei Kuffour popularly known as Obour, MUSIGA president in his address said musicians have got to a point to rebrand and re-structure the music industry because the one-time giant of African music has gone to sleep – and needs to be awoken.

He said the music industry holds a huge potential in helping turn the economic fortunes of Ghana: “If well resourced and professionally managed,” under his administration, “they will make sure the industry adds its quota to the development of the country.”

The Ball was attended by personalities from the government, the corporate societies, musicians and other spheres of life notable among them were the former First Lady, Nana Konadu Agyeman-Rawlings, Dr Kofi Amoah, Nana Kwame Ampedu and actress Pascaline Edwards.

It is aimed at raising funds to set the MUSIGA Music Development Fund (MIDF) to help rebuild the music industry. MUSIGA hopes to raise GH¢500,000 from the ball as seed money for the fund; GH¢1 million in the long term.

The fund will help execute programs aimed at putting in place structures to make the business of music worthwhile and will ultimately help the Ghanaian music industry attract the needed investments.

Key areas the fund will assist include artistes and talent development, music business education and ICT, and the establishment of record labels to help market Ghanaian music globally.

There was a live auction of antique musical instruments; Nana Ampadu's first electronic guitar that went for GH¢5,000, E.T. Mensah's LP was bought for GH¢2,000 and Mac Tontoh's first trumpet went for GH¢5,000. The late A.K. Badu of Ambassador Records was honoured at the event.

A documentary titled This is Musiga which encompasses the plight of the music industry was aired. The night also witnessed exciting performances from Diamond, DSP Kofi Sarpong, Papa Yankson, Okyeame Kwame, Nana Kwame Ampadu and Kaakyire Kwame Appiah, Rex Omar and a host of others.