Michael Jackson 'warned about propofol use' 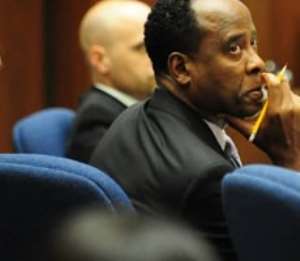 Singer Michael Jackson was warned by a nurse practitioner about using the sedative propofol to help him sleep, a Los Angeles court has heard.

Cherilyn Lee said Jackson told her that Diprivan - a brand name for propofol - was the only thing that would knock him out and induce the sleep he needed.

Ms Lee was testifying on Tuesday at the involuntary manslaughter trial of the singer's physician, Dr Conrad Murray.

His lawyers have told the judge they would not be calling him to the stand.

Lee, a nutritionist and holistic nurse, was called to testify for the defence. She told jurors she had tried to give Jackson natural remedies to deal with his insomnia and had told him propofol was too dangerous to be used at his home.

Under cross-examination by the prosecution, the tearful witness acknowledged a conversation with the singer in which she told him: "No one who cared or had your best interest at heart would give you this."

After refusing to supply him with the drug in April 2009, she continued, she never saw Jackson again.

The superstar died on 25 June that year, a death the Los Angeles coroner subsequently attributed to "acute propofol intoxication".

Dr Murray has pleaded not guilty to involuntary manslaughter, arguing that Jackson self-administered the dose that killed him.

If convicted he could face up to four years in prison and the loss of his medical licence.

Dr Murray was hired in May 2009 by promoters AEG Live to be the star's personal physician ahead of a 50-date concert comeback in London.

His defence team had wanted to introduce Jackson's contract to show he would have owed $40 million (£25m) to the promoter if the concerts were cancelled.

The lawyers had wanted to argue that Jackson would have been desperate to make sure the shows continued and needed sleep to get through rehearsals.

But Judge Pastor said there was no evidence Jackson was concerned about the money and allowing testimony about the contract might confuse jurors.

"This is not a contractual dispute," he said on Tuesday. "This is a homicide case."

It is believed the case, now in its fifth week, could go to the jury by the end of this week.