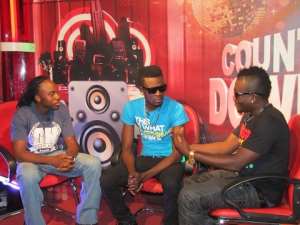 Ghanaian hiplife duo Ruff and Smooth made up of Ricky Nana Agyemang (known is showbiz circles as Bullet) and Clement Baafo Foh (known as Ahkan) are set to release their second album in December this year.

The duo who started their music careers as solo artists came together last year to work on an album which was preceded by the release of a single “Swagger” which enjoyed massive air play across the country.

Appearing on Hitz TV's COUNTDOWN show on Multi TV, the duo told show host Magma they are working on a new album – the second since coming together as a group.

According to them, the second album is scheduled for release in December 2011 following which they will embark on a regional tour and a continental tour fom January 2012.

The “Sex Machine” hit makers who have picked up some international music awards told Magma they are looking forward to winning Grammy Awards in the next five years.

Ruff and Smooth shot into fame with their popular “Swagger” song and have since released songs such as “Sex Machine” and “Azingele” which have all received massive airplay.

The duo who seem to be fading away from the Ghanaian music scene apparently have been making impressive showings outside the country. They picked up an award as the Most Promising African Artiste at the first annual African Entertainment Awards held in Toronto, Canada last and they are bent on winning more laurels.