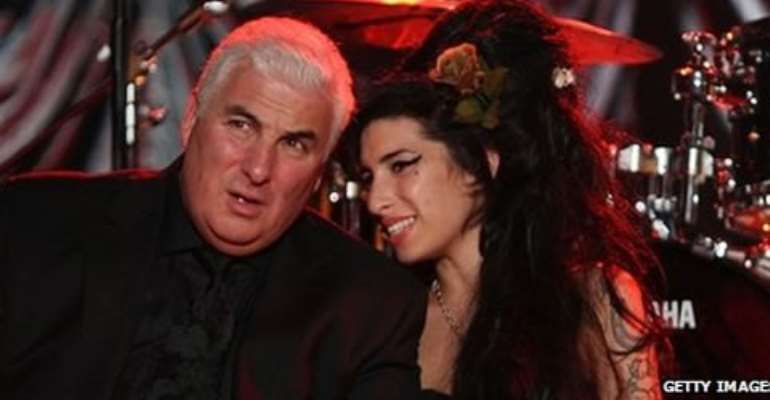 Mitch Winehouse with his daughter Amy

Amy Winehouse's father has said his daughter was trying to overcome an addiction with alcohol, but not drugs, before her death.

Mitch Winehouse said she had been clean of illegal drugs for three years before she died in July.

He told Newsbeat she had replaced her previous drug problems with addictions to exercise and shopping.

But added: "Then it was drinking and unfortunately that's not quite so easy to over come."

Mitch Winehouse was speaking as he officially launched a foundation in his daughter's name - on what would have been her 28th birthday - in order to benefit "hundreds, thousands of small charities up and down the country".

"Nobody could have foreseen what would have happened," he said.

Her father said that he, and the singer's management, did everything they could to help her and that she was on the road to recovery.

"Unfortunately as in a lot of addiction cases one addiction can follow another," he said.

Toxicology results released last month said "no illegal substances" were in Amy's system at the time of her death.

Her family said tests indicate alcohol was present but that it could not be determined if it played a role in the singer's death yet.

Public performances
Mitch Winehouse said he couldn't bring himself to watch footage of one of Amy's final live appearances at a festival in Belgrade in June.

On stage she appeared intoxicated and was booed by the crowd.

Challenged on why the singer was allowed to continue with the concerts he said, "Well, they did stop."

"The moment her management team knew there was going to be a problem they stopped everything.

"The problem is that Amy asked to do those shows.
"Had you have been at her private show she did the week before you'd have seen the most talented performer in the world - she was on great form."

'Negative' Blake
Mitch, who was in New York when he found out about his daughter's death, said he had regrets about some of Amy's life choices - citing her marriage to Blake Fielder-Civil.

"It's clear that Blake was a turning point in her life - negatively," he said.

"There wasn't anything I could do to stop that - she loved Blake and Blake loved her.

"It was a shame that he was so screwed up and that he brought Amy into that same orbit.

"If I had a wish - it would have been to have tried to stop her doing that. I did try - I can assure you."

New music?
One of Amy Winehouse's last recordings - a duet with jazz legend Tony Bennett called Body & Soul - is to be released with the proceeds going to the newly set up Amy Winehouse foundation.

But Mitch said he would like to see an album of unheard material recorded by the singer released at some stage in the future.

"There is stuff that you haven't heard that could be added to that catalogue.

"Through Twitter and though e-mail we get thousands of messages a week saying, 'When is the album going to be coming out?'

"Personally I would like the album to come out if the material is deemed to be good enough.

"We will have to wait and see but I would think that that is possible."