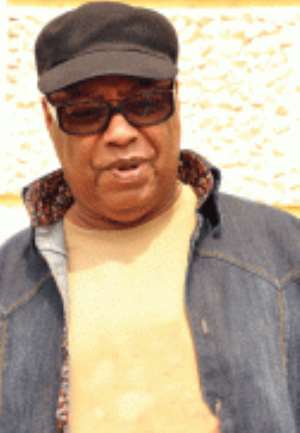 American gospel icon and king of praise, , touched down Wednesday afternoon at the Kotoka International Airport, for the 2011 edition of Adom Praiz.

Dr Kenoly touched down at about 2 pm, aboard a United Airlines flight and was met on arrival by an equally delighted team from Adom FM, hosts and organisers of the event including head of religious programmes, Rev. Yaw Owusu Ansah, Linda Bartels-Poku, Finance Manager; Edward Entee, Sales Manager; Nii Noi Vanderpuye, Managing Editor, and Jerry Justice, host of Work and Happiness.

In a brief interaction with media personnel after his arrival, Dr Kenoly, who was in high spirits said, “I’m excited to be back in Ghana. I’m looking forward to the concert and everything that is going to happen before the day.”

Saturday’s night-long gospel concert is the third since its institution in 2009 as an annual praise and worship platform to honour God for the fulfilment of His promises.

As a gospel musician, Ron Kenoly is also a celebrated worship leader, singer and songwriter. He began working in full-time ministry in 1985 when he started as a worship leader at Jubilee Christian Centre in San Jose, California. Not long after that, in 1987, he was ordained and installed as Music Pastor.

Ron Kenoly began singing in a Baptist church in his home town, Coffeyville, Kansas. He spent time working in the Air Force and raising a family, and later became a successful charting singer in the early ‘70s in Los Angeles, but recommitted his life to Christ in 1975. Dr Kenoly then received his Master’s degree in music at the College of Alameda in California, and became a voice teacher.

He began to lead praise and worship services at a local Pentecostal church, and caught the eye of Integrity Records, which signed him to a contract. His first album, Jesus Is Alive, was followed by the fastest-selling praise and worship album ever, Lift Him Up. Both that album and the next, God Is Able, were nominated for Dove awards.

Kenoly has also released Sing out with One Voice, and in 1995 passed the one-million mark in total sales. In 1996, he released Welcome Home, his major label debut. Majesty followed two years later, and in 1999 Kenoly returned with We Offer Praises. Dwell In the House followed in spring 2001.

Ron has two sons who are also into gospel music. They are Samuel and Ronald Jnr. The duet perform under the name The Kenoly Brothers.

He will also be on other platforms within the Multimedia Group and other partner stations.

Dr Kenoly will in the later hours of Thursday and the better part of Friday, be rehearsing with his band at the Dome in preparation for Saturday.