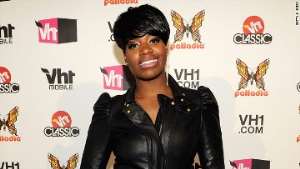 
Singer Fantasia Barrino revealed during a concert Sunday what has been rumoured for months - she is pregnant.

"God has given me this child and I don't have to hide it from none of y'all," Barrino told fans at the outdoor show in Jacksonville, Florida.

The 2004 "American Idol" winner did not say when the baby is due or who is the father. Her manager did not immediately respond to CNN requests for information.

"You are the first person that I share this news with, and I share this with you because I can relate to you," Barrino told fans. "And for a while I walked around figuring out 'What will they say and what will they think about me?' But now I tell you I don't live my life for folk."

Barrino's weight gain fueled online rumours seven months ago that the R&B singer was expecting a child, but her manager said she was gaining 45 pounds in preparation to play legendary gospel singer Mahalia Jackson in a movie.

The past year has been difficult for the 27-year-old Barrino, who acknowledged a relationship with a married man last summer. She initially denied knowing Antwaun Cook was married.

She was treated at a Charlotte, North Carolina, hospital for a "sleep aid" overdose several days after Cook's wife filed a child-custody petition that included allegations of the affair.

Barrino later testified in the child custody case that she knew from the first day of her relationship with Cook that he was married and still living with his wife, according to court records.

Barrino, who has a 9-year-old daughter, delivered a lecture to her younger fans during Sunday's show, telling them "Take my word and run with it."

Barrino's raw talent as a songstress, combined with her hard-luck story as a teenage mother, won her many fans, starting with her winning the third season of "American Idol."

Her six-year-long entertainment career has been pockmarked with adversity, including being sued by her own father and well-publicized financial troubles.