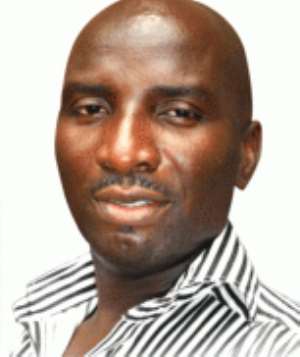 Film producer , C.E.O of Movie Africa has said that he would never allow her daughter to marry a filmmaker. In a rare interview with Showbiz last week, which for the first time touched on the family life of the controversial producer, he said “my daughter will not marry a filmmaker, not even in the name of love”.

Socrate is the father of three sons and one daughter and he said he had arrived at that decision because of his own experience. “If you are a filmmaker and you do not have a very strong partner who can take care of the family, I bet you cannot run a good home”, he said.

Socrate revealed that, he was into filmmaking long before he met his wife, Mercy, and since they got married 18 years ago, he had not had enough time for her and kids at home. He said, “I leave home very early in the morning and return late at night without seeing my kids and this, I know, is really affecting my family but thanks to my wife”.

Due to this situation, after 25 years in the business, Socrate said he was considering retiring from filmmaking in the next two years to make time for his family. He was full of praise for his wife for taking care of their home so efficiently. “Not all women will agree to such a situation”, he said.

When Showbiz called up Mrs Mercy Safo she confirmed that living with his filmmaker husband had been difficult. “I understand the nature of his job; I know it's the kind which often keeps him busy but I always need extra grace to help cater for the home and the kids.

“Sometimes I am forced to think that he has taken up a job which is bigger than him. It hasn't been easy for me and the kids. We have three boys and it's really difficult controlling boys. You sometimes need a deeper voice and male presence”.

has been a controversial filmmaker. How does Mrs Safo feel when she hears people saying all sorts of things about him?

“It makes me uncomfortable. I remember I once rode on a mini bus and it turned out that my husband was the topic and the things some of the passengers were were saying about him almost made me cry. I was afraid to reveal myself and defend him”.

“Many times I’ve told him to tone down his movie stories. You see, I am a leader in my church and it makes me uneasy whenever he releases a new movie. I know that many people do not understand that his job is make-believe”.

When Showbiz asked Mercy whether she is comfortable with the substantial income that filmmakers are believed to make, she laughed and replied: “curiously, I don't know where all the money goes but I know he's been doing a lot of charity and I wish to tell him to extend his charity to my account so I can enjoy some more.”