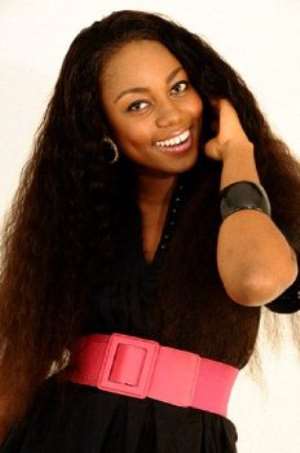 The beautiful actress was at the two schools as part of her tour of schools to promote her Glaucoma Essay Competition.

The essay competition forms part of her strategy to intensify her campaign against the Glaucoma ailment.

She went there to talk to the children about Glaucoma, and also encouraged them to partake in the essay competition in which the main winner is guaranteed to work with her Glaucoma foundation.

The winner stands the chance of getting other attractive prizes including laptops and a two-week holiday in the UK.

For the children, the actress' presence at their school was enough. They showed their excitement by welcoming her with loud cheers and applause, and also entertained her with dance and rap performances.

The children also grilled Yvonne with very good questions including why she decided to take up a campaign against Glaucoma, and if she had Glaucoma.

She told them she was Glaucoma free but her grandma had it. She said she frequently had her eyes checked and that as at now, she was healthy.

The leggy actress first visited the Angels basic school, where a student demanded a hug from her. The same happened at St. Michaels High School at Nungua.

After the official ceremonies at both schools, the children refused to let Yvonne leave as they followed her, demanding for autographs and photo opportunities.

She allowed that to an extent but the numbers were just too much for her. They finally had to allow her upon pleas by the teachers, headmasters and the actress herself.

So far, a lot of children have registered to partake in the competition. Yvonne is due to visit other schools in Tema and Accra as well.

The actress has been leading a campaign against Glaucoma since last year October after launching her Glaucoma Foundation. She recorded a song and video on glaucoma which featured stars John Dumelo, Majid Michel, Bola Ray, Sarkodie and a number of others.

The song picked up a prize at the Ghana Music Awards. Besides adopting a Glaucoma victim to cater for his medical expenses, she also donated GH¢1000 to support the Glaucoma Association of Ghana Fund to help glaucoma patients afford medication.