'Somewhere In Africa' Is Significant To Africans-Frank Raja 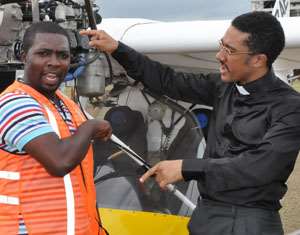 Award-winning director Frank Rajah Arase has stated that his upcoming movie, ' Somewhere In Africa', will be significant to all Africans.

The movie, which will be premiered at the National Theatre in Accra on July 30 and recaptures the heinous stories of how some African regimes have been maltreating their citizenry, is a total deviation from the normal love-dominated movies that have been flocking the Ghanaian and African movie markets.

Speaking with BEATWAVES after the movie's 30-minute premiere at the Silverbird Cinema last week Wednesday, the director and writer said, 'The message and scenes from the movie were to bring people's (Africans') mind to the realization that this is not just a movie but something that is really happening in Accra. It is a wake-up call. The movie is not just to entertain but mirror you and see what is happening; let it reflect on you as African.'

The movie tells the story of Yusuf Mumbasa (Majid Michel), who after escaping an assassination attempt by King of Kimbala, captured power via a coup d'Ã©tat and ordered the killing of all previous government appointees. The minority, including students, went on the streets to demonstrate, but Yusuf would have none of that.

The story has a striking resemblance to Ghana's political history but Frank Rajah said he researched most African governments before coming up with the script.

'The movie is intended to call Africans to return home and put themselves together and help build the united state of Africa that we all yearn for and leave peacefully as well as build a future for African children,' he added.