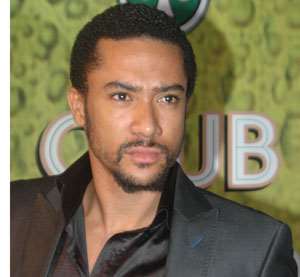 NEWS-ONE has gathered that players within Ghana's movie industry are covering up an incident in which actor Majid Michel reportedly had a poisonous substance put in his food.

Our sources say during the shooting of the movie 'Somewhere in Africa', medical reports suggested that someone had put poison in a tin of milk Majid was supposed to have used in his food.

'It was very serious but we have been asked to keep quiet about it. When he took the tin of milk, he realized that the contents had changed into a very black substance so he got scared and raised an alarm. He was taken to the hospital and the doctors confirmed that it was food poisoning.

'It is not clear who exactly did it but the milk was opened the previous night and was to have been used but something else came up so he put the milk back in the fridge and went with his friends to eat in town.

'The next morning he took it again to use and saw the black substance,' the source revealed.

Two other sources who were part of the cast and crew of ' Somewhere In Africa' also confirmed the report to NEWS-ONE but begged to remain anonymous. What they added was that Majid left his hotel room door open when he went out with friends that previous night, noting that was the time his milk might have been poisoned.

The incident reportedly happened in a hotel near Shia Hills in Accra.

The award-winning actor recently topped headlines when he was sacked from the red carpet being used by celebrities and VIPs at the 64th annual Cannes Film Festival in France last month because he was not wearing the right type of shoes, NEWS-ONE has gathered.

An eyewitness told NEWS-ONE that: 'It was a very long red carpet and when Majid hit the run way he was very happy, walking with a spring in his steps when suddenly the guys from security and protocol signaled him to come over.

'He initially thought it was for an autograph or something but his face changed when they informed him that he had been given five minutes to either leave the red carpet or go change his shoes.

'He was dressed in a pair of jeans, and a jacket on top but was wearing a pair of sneakers on his feet…it was both funny and a bit embarrassing but eventually he had to get off the carpet and quickly buy a pair of new shoes from a Lebanese guy who was selling some cheap executive shoes not far away,' the source who attended the Cannes Film Festival narrated.